Previous article The Bitcoin Cash Hash War is Over. It Also Ended the BTC/BCH War. Next article

The Bitcoin Cash Hash War is Over. It Also Ended the BTC/BCH War.

Coingeek, the voice of Calvin Ayre and the most prominent supporter of Craig Wright and his Bitcoin SV chain, has apparently thrown in the towel. They have announced that they are no longer trying to unify the chains under the Bitcoin SV rules or fighting for the BCH ticker.. Instead, they are moving forward with the BSV ticker and their claim that their vision is the true form of bitcoin. They have also added their own replay protection, eliminating the possibility of unifying the chains.

On all fronts it seems that they lost and this is the closest we are likely to get to a concession speech. In a press release titled “Original Bitcoin is Reborn with Bitcoin SV (BSV); BCH Hash War Ends” Ayre was quoted as saying

“After Bitcoin Core became SegWit coin last year, our mission has always been to make sure the original Bitcoin survives and succeeds. With its series of radical and unilateral code changes in just the last week, ABC’s BCH has departed so far from the original Bitcoin that it is now an alt-coin developer experiment and we no longer have any interest in it or its tarnished brand. Bitcoin SV fought to preserve the Satoshi Vision, and is the original Bitcoin. We will now focus entirely on building upon an already vibrant Bitcoin SV ecosystem. Although ABC may keep the damaged BCH ticker symbol, BSV is winning over BCH’s native application ecosystem in droves. We look forward to out-competing BCH (and BTC) in the marketplace, rather than in further chain battles.”

While Ayre puts on a brave face (and would do so again in his own op-ed also posted on CoinGeek) this is a vast departure from what he was promising before the fork happened. In a September 10th post titled “CoinGeek commits to never allow Bitmain’s Bitcoin Hash War to Split BCH Chain” that was also credited to Ayre, he laid out a set of goals different than “out competing in the marketplace”

“Additionally, we will fight any attempts by anyone else to cause a chain split. CoinGeek and friends believe in the Satoshi Vision for the evolution of Bitcoin and that means all disputes should be settled by Nakamoto consensus and Miner hash elections. Nakamoto consensus dictates that at all times the longest chain (with the most Proof of Work) shall prevail and this will be respected at all times by CoinGeek Media and Mining.”

Despite this proclamation, CoinGeek’s mining pool did not switch to the longest chain with the most proof of work when that chain ended up being the BCH (ABC) chain. They claim that extra work was due to rented hash rather than honest hash. That may or may not be true but there is nothing in the Satoshi white paper about where the hashing power comes from.

They can complain about tactics all they want, but the fact is Roger Ver and Jihan Wu kicked their ass so convincingly, its hard to imagine anyone buying into Ayre’s spin of the situation.

Wu and Ver had more than enough hashing power in reserve to destroy Wright’s attempt to dictate  Bitcoin Cash development. They also turned Wright’s long hyped “Satoshi’s Shotgun” back on itself, ultimately slowing the SV chain while not affecting the ABC chain at all.

Personally, I don’t have a dog in the Bitcoin Cash race, I’m not a fan of the ABC or the SV variety. But seeing a blowhard like “Faketoshi” Wright and his financier Ayre fall on their face after making loud and definitive proclamation, has been hilarious to myself and much of the Bitcoin community. Surely, the man who invented bitcoin would have seen Ver’s tactics coming?

But the man who claims to be Satoshi and failed to prove it, definitely didn’t see this coming. In short, they tried underhanded tactics, threats and pumping their chest. And when all that failed they still thought they would win through pure hash power, but they failed again. Now, they are trying to change the goal posts to proclaim that they actually won all along. But not even the internet has that short of a memory. Even five days after the hash war started, Wright promised to never stop the fight.

During the hash war, Bitcoin SV had a few minutes of being ahead of the ABC chain and when that happened, Wright stated that it was an indication that he was winning. 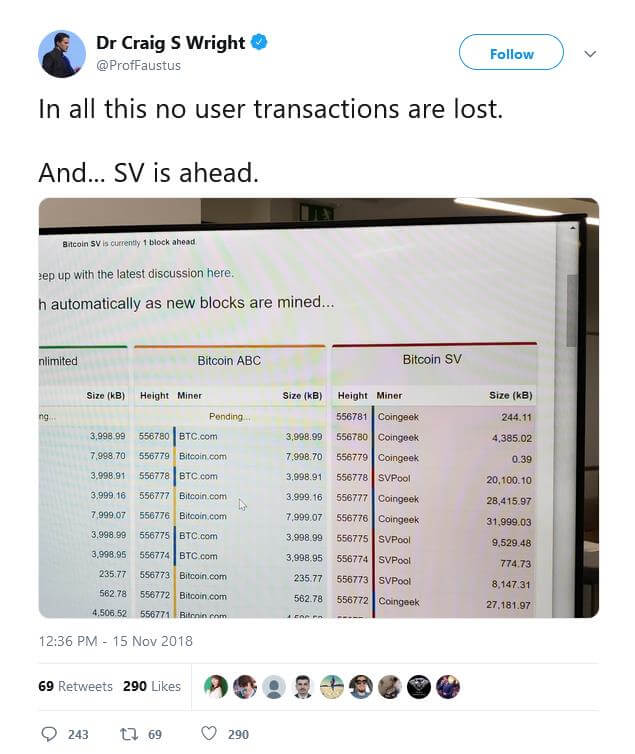 But then they lost that lead and never got it back. Keep in mind, before the war started, Wright claimed there would be no split at all.

Whoops. Not only was there a split, Craig got the much smaller half.

After virtually every exchange of note gave ABC the BCH tracker and the only services that came to SV’s side were the ones preordained to, the writing was on the wall. Wright and Ayre took it as far as they could, but even narcissists have to admit defeat eventually. Or in this case, claim they were never trying to win anyway.

The one silver lining for SV holders is that it saw a significant gain yesterday. That makes sense because Wright and Ayre finally called off their doomed war. The immediate issue of an on-going, expensive hash war with a more popular opponent ended. It had no where to go but up, especially with the increased stability that comes with services and exchanges settling on a unified ticker and announcing their plans for BSV.

I said a while back that this split could kill Bitcoin Cash. I didn’t mean (and indicated this in the article) that it would disappear completely. Paycoin is still traded on a few markets after all. But I meant it could have killed not only any chance Bitcoin Cash had of over taking Bitcoin, but also knock it off its perch as the most popular alternative to Bitcoin that isn’t Ethereum.

I’m not sure if that will happen or not. ABC so dominantly beat BSV in the hash wars that, while more than $2.5 billion in lost value (and more if you count the value that went to BSV) is massive, they managed to keep BCH above LTC in marketcap, for now.

But they are no longer claiming to be the true Bitcoin. I mean they are, even BSV supporters are, but no one is taking them seriously anymore. CNBC, who used to love to call on Roger Ver for commentary on the BTC/BCH split, wasn’t calling this the “Bitcoin Hash Wars.” They barely talked about it at all.

You can disagree with what the core developers have been doing to Bitcoin if you want, but you can’t argue if they have been doing it to Bitcoin. That debate has finished. Craig Wright killed it. Maybe we should thank him.

The rise and fall of Internet Computer: How ICP imploded