The last few months have seen a growing number of all-in-one Bitcoin and Lightning nodes emerging on to the marketplace, enabling more and more users to begin to experience the Lightning network payment system, which now has a total network capacity in the region of 450BTC. The pace of development over the last 12 months has been truly impressive, and it’s hard to believe that it has been such a short amount of time since the first initial public testnet payments occurring in late 2017. Fast forward to today, and there are now over 4000 main net nodes active on the network with upwards of $1.75M of BTC capacity.

Lightning network-based e-commerce has also been steadily finding its feet, with the successes of BTCPay Server likely playing a key role in this development. BTCPay Server is a project initiated by Nicolas Dorier to serve as a self-hosted, non-custodial Bitcoin payment processor, which includes Lightning capabilities and is used in a growing number of e-commerce settings. It features an incredibly straightforward configuration and setup process, which can plug into most e-commerce site flows with ease. There is also the Lightning Charge payment solution and the associated WooCommerce gateway developed by Blockstream, which can easily be added to a huge number of WordPress-based sites. As self-managed solutions, both BTCPay Server and Lightning Charge require access to both a Bitcoin full node and Lightning network node, which can either be run in the cloud or on one of the number of dedicated all-in-one node systems now available.

At this stage of development, access to a full archival node is a prerequisite for really engaging with Lightning, although the Neutrino light client looks like a promising solution for the future, in setups with storage constraints like smartphones. Users who have tried to set up Bitcoin full-nodes in recent times will be all too aware of the continually growing storage and bandwidth requirements, that can make running a node on a home PC or laptop impractical. In response to this issue, the market seems to have honed in on the need for dedicated devices to handle full-node functions, in particular with the growing interest in the Lightning network. There are now a handful of these dedicated nodes available to purchase, including the high-profile Casa node, Lightning In A Box, the Nodl and the self-assembled Raspiblitz project:

The Nodl node from KetoMiner (Michel) emerged as a prototype earlier this year at the HodlHodl Baltic Honeybadger conference and is one of the more powerful all-in-one nodes units available. In an email conversation, Michel outlined his initial experiments in trying to squeeze a functional node into the space of an external drive casing back in 2017, and the lessons learnt through the iterative development process that has informed the product he has now made available to the public. Several boards from Pine64, and a variety of HDDs and SSDs were tested to compare sync speed and performance before the final configuration was established. The Nodl box now available utilises a Rock64 board with 4GB RAM, rather than the 1GB of most Raspberry Pi based setups, and this allows the unit to comfortably run BTCPay Server software alongside bitcoin and lightning node software, as well as altcoin software if desired. This coupled with the use of an SSD rather than HDD allows the device to perform a full sync from block 0 within less than a week, which would be unheard of for a Raspberry Pi node. As such, the device is delivered without the blockchain pre-downloaded and the user must sync before use. This is in keeping with the trustless ethos that is paramount to cryptocurrencies in general, and as Michel explained:

“Since we have the comfort of having a device capable of full sync in less than a week, I don’t want people to have to trust me with what I preload on it.”

The Rock64 board is directly connected to the SSD within a sleek metal box, eliminating the cable loop necessary with Raspberry Pi based units to connect an external HDD to the main board.

The Casa unit has been getting a lot of attention across the Bitcoin community on Twitter, with many pre-order customers starting to receive their nodes over the last few weeks, and a further batch of pre-orders now scheduled for January shipping. The units look great and offer an easy-to-use web-based UI which make for a streamlined interaction with Lightning for new users. The Casa team is impressive, featuring a number of high-profile names with solid Bitcoin credentials, including Jameson Lopp (ex-Bitgo) and Alena Vranova (ex-Trezor). The devices come with a pre-synced blockchain as the Raspberry Pi board used in the unit would struggle to sync from scratch in a reasonable timeframe, but this means users can get to interacting with the Lightning network with minimal delay. 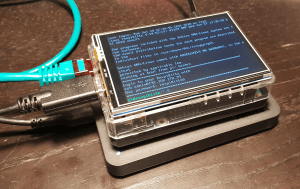 The self-assembled Raspiblitz was conceived to support the Lightning Hackdays in Berlin, run by Fulmo. Christian Rootzol communicated their process and the desire to cut down set up time, so developers could focus on building with Lightning, rather than wasting time syncing the Bitcoin blockchain:

“When we started the Lightning Hackdays in Berlin, we wanted to support developers building Apps on the Lightning-Network (LApps). Having a running node was a base requirement for that and we quickly realised that setting up a node was a task that was hard to realize within the timeframe of such an event.”

The Raspiblitz project was quickly picked up by the wider community, with people choosing to set up their own at home without being involved with the hackdays. The Blitz is an extension to the Raspibolt project by Stadicus, but Christian has streamlined much of the setup process into a series of shell scripts that are easy to follow. The device features an LCD screen and is controlled via SSH, but the setup shell scripts mean the user doesn’t need to dive too deep into the command line to interact with the node.

The project is on Github and users from all over the world have now contributed shopping lists to help others source the required parts from multiple countries. As well as the essential functions of the LND and Bitcoind software, such as handling the opening and closing Lightning channels, additional features have steadily been added to the Raspiblitz. These include a streamlined configuration for connection to either the Zap or Shango iOS wallets for mobile payments and installation of the Ride the Lightning web interface for an enhanced UI-based Lightning experience. The project is ongoing and Christian hopes to

have version 1.0 released in time for the Chaos Communication Congress 35C3 event at the end of the year in Leipzig, Germany. Raspiblitz 1.0 will have all the basic features fully-functioning and the handful of bugs that initial users have discovered resolved. Raspiblitz users can now also get a slick 3D printed case from CryptoCloaks, which is custom designed for a snug fit with the Raspiblitz hardware.

The progress is a testament to Christian’s hard work and the great open community around Bitcoin and Lightning. The Raspiblitz project enables would-be Lightning developers to get their hands on a functioning node setup for less than $150 and they can be building on Lightning within the space of a couple of days. This all makes for a really enjoyable DIY experience, and as summarised by Christian himself:

“I really hope we can keep up the good spirit, but please don’t start to put too much trust in me with the Blitz. It’s always been and will always be a very hacky journey for some time, even when it starts to look more consumer-friendly. Just experiment with funds, you can afford to lose. If you see the project getting too centralized – fork it. If you can read the code – please do so.”

Lightning In A Box Node

The Lightning In A Box unit utilises the Intel-based Gigabyte Brix compact PC, instead of the ARM-based processing featured on the smaller Raspberry Pi and Rock64 boards. The node can be pre-configured with either LND or c-lightning, depending on the buyer’s preference, and comes with BTCPay Server installed. This setup makes for another more high-powered option, similar to the Nodl box, and could serve as a great option for a self-hosted Lightning e-commerce solution with the included BTCPay Server instance. The Lightning In A Box team also sells pre-assembled Raspiblitz units, for those who want to buy a ready-to-go Raspiblitz setup without sourcing the parts themselves.

The straightforward all-in-one full node solutions now available are a promising development, as enhancing the ease of running a node is an important step towards increasing the number of Bitcoin users independently verifying transactions, rather than relying on trusted third-parties. The easy setup is also a boon for developers, allowing them to get straight to building on Lightning and contributing to a growing collection of first generation LApps. The rise of open-source payment processing with BTCPay Server should serve to empower e-commerce operators to avoid custodial payment handling and instead run their own Bitcoin and Lightning nodes alongside BTCPay Server. A node unit such as the Nodl or Casa, could one day be an integral part of the office setup, alongside the router, silently handling Lightning payments and even taking modest fees for forwarding transactions.

Whilst the pace of development has been incredibly exciting with Lightning, it is worth remembering that this is a new technology that continues to evolve at a tremendous rate. In Adelaide last month, Lightning protocol developers came together for the Lightning Summit, to discuss a series of proposals to be included in version 1.1 of the Lightning Specification. The proposed changes and additions, such as the introduction of dual-channel funding and splicing, represent the latest stage in the development of the Lightning protocol itself, incorporating the various improvements concocted throughout the last 12 months of testing across the three main Lightning software implementations. This development process is what makes open-source so exciting and following the process as an observer brings to light the incredible vision of the dedicated developers behind the Lightning network. The development of a range of all-in-one nodes is a great step in the process of bringing Lightning network payments to a wider audience and should empower a whole new cohort of developers to get started building great LApps with the powerful second layer technology.

Thanks to Ketominer, Rootzoll and Lightninginabox for their time in discussing each of their nodes respectively.