Coin Center made news recently after it announced a public/private forum in partnership with The Chamber of Digital Commerce and US Law Enforcement. But they have been focused on Bitcoin education and advocacy long before that and one of their first major projects was sending out physical “pocket” versions of Bitcoin A Peer-to-Peer Electronic Cash System better known as Satoshi’s Bitcoin White Paper.

We got our hands on one and wanted to share a few high-res images of it so the community at-large could take a look. Coin Center tells us that they sent them only to people who specifically signed up for one.

When we originally received the white paper we reached out to Coin Center, asking them what inspired them to take on this project and this is what they gave us.

Coin Center is a non-profit which works to ensure that any regulatory reaction to digital currencies like Bitcoin is based on a sound understanding of the technology and keeps the way clear for blockchain innovation. We rely on continued support from the digital currency community to fund our policy research and advocacy efforts. The Coin Center pocket edition Bitcoin white paper was originally developed as a thank you gift for our donors.

Once we saw how popular they were we decided to open up their availability for a limited time. The giveaway was a fun way to give back to the community. It also raised awareness for the regulatory challenges facing digital currencies and the important work that Coin Center is doing on that front.

Overall, it isn’t a bad piece of physical Bitcoin memorabilia. It feels high quality in your hand, like what you are holding is important. I’m going to get into some criticisms of it now, but I want to stress that I think this was a positive program from Coin Center overall and they should be commended for it. My criticisms are minor and have more to do with the current state of Bitcoin’s community than anything Coin Center actually did. That being said, the pocket white paper instantly reminds me of the pocket New Testament frequently carried by evangelical types, and I think that is a problem. Not a huge problem, but a problem. (We later asked Coin Center if the resemblance was intentional but have not heard back at press time.)

First, what makes it resemble a bible? It certainly isn’t thick like a Bible (or even the New Testament) is. It has a faux-leather cover that is similar to the material you’ll often see used for bibles. The name of the document is embroidered on the top, with Satoshi Nakamoto’s name at the bottom (as the author) and a symbol that the uneducated could easily mistake for a religious one. Inside, the paper is that same thin paper that fills up the Bibles and Hymn books in church pews around the world. No one would mistake this for a Bible, but nearly everyone I showed it to, especially those with religious backgrounds, made the connection. One could be forgiven for thinking the document’s creators think it is as important as the Bible. 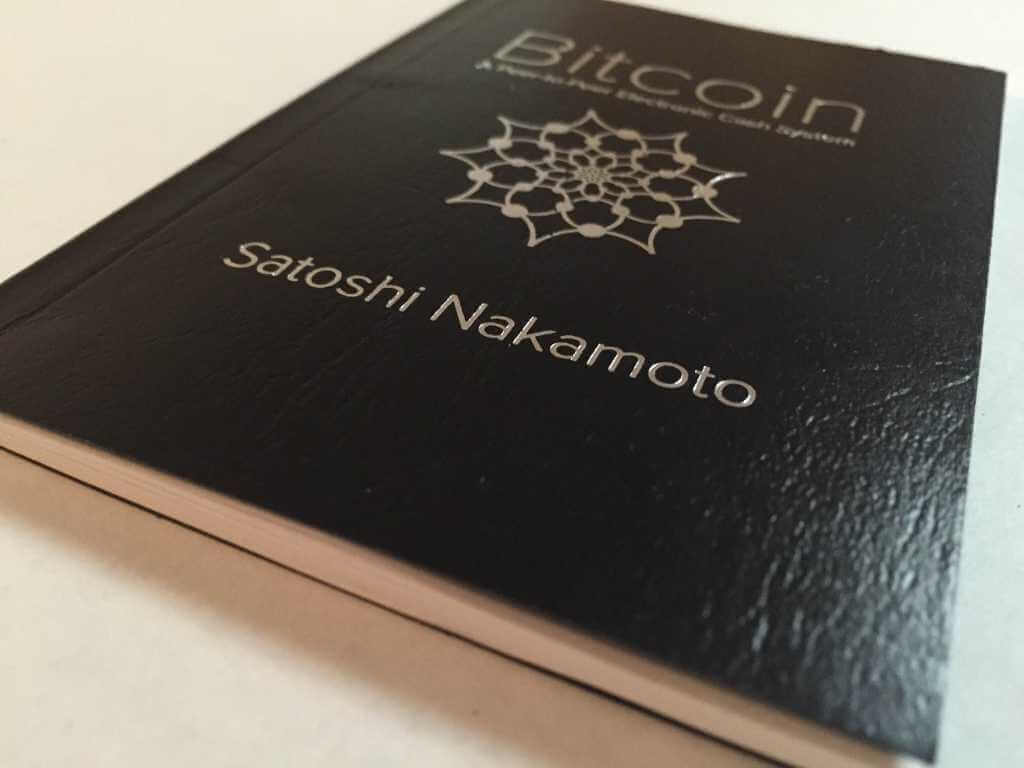 Whatever reason Satoshi had for leaving the community, I believe it was the right decision to make. Having one person lead a revolutionary technology like bitcoin is dangerous for multiple reasons we don’t have time to get into at the moment. But Nakamoto leaving also had one (likely) unintended consequence: It turned him into something resembling a deity. I have written in the past about how dangerous I think that is, how it is harmful to healthy debate and discourse, but there is another problem with the growing Satoshi Religion: It makes the bitcoin community look bad.

Like most Bitcoin users, I have become a Bitcoin advocate. While I am mindful of not pushing it onto people, I am often asked about it and am usually more than happy to educate the public when they ask. Even still, I often feel like one of those door-to-door Mormons. I sometimes don’t feel far off from saying something like “Do you have some time to hear the good news about our lord and savior Bitcoin?” The pedestal we have put Satoshi on isn’t helpful and I’m not sure if making his Whitepaper resemble a Bible is a good idea either.

Imagine you are someone hearing about Bitcoin for the first time. The person who told you about it is rambling on about fed money, the death of banks, decentralization and other concepts that are completely new to you and sound borderline insane. Then, this guy pulls out a leather bound document, written by a mysterious figure who, not unlike Jesus, disappeared after getting his movement started, but unlike Jesus, he didn’t tell anyone his name and it happened last decade. At that point you couldn’t be blamed for thinking Scientologists are relatively sane.

The letter included with the document, a “personal note” from Director Jerry Brito, includes not one but two “P.S.” notes at the end, both asking for money. I understand most people who received this asked for it, but people did order them for their friends and family as well. To them, this could seem a bit pushy and again, brings to mind the evangelical types that send out notes asking for money so they can clean the world of sinners.

Ultimately, this is just nitpicking. Overall, I think a physical white paper given out to those that expressed interest is a good thing. Big picture, it is probably more important that the white paper be made out of high quality materials, so it can last, than it is to make it not resemble a Bible. Coin Center should be commended for making this, presumably at a not-insignificant cost, with the goal of increasing Bitcoin adoption. The resemblance to the Bible isn’t that big of a deal, those without religious backgrounds probably won’t even notice. But it is something to keep in mind, if you plan on keeping the document at the ready in your breast pocket, in case someone asks you about Bitcoin. Evangelizing about Bitcoin is a good thing and the Coin Center provided physical white paper seems like it could be a useful tool towards that end, but be conscious of how it may make you look. Don’t clutch it to your heart while you and a friend walk door-to-door with matching dress shirts and ties. It is a great resource to have, but don’t quote it like scripture, it’s not scripture, it is a simple explanation of a complex technology written by a man in 2008. Don’t make it anything more than that, the world has enough religions and religious texts.