Home › Latest News › Varanida is Aiming to Improve the Experience of Web Users, Advertisers, and Publishers with the Blockchain

The advertising industry is broken.

In today’s digital era the internet is a place where we gather information, connect with others, and share our knowledge. Advertising is also something that greatly impacts a person’s decision on a particular product or service.

Yet, while it’s an industry that powers the internet, advertising is also holding back its potential. This is down to the fact that users are being overwhelmed by bad ads, which is seeing a decrease in the amount of revenue generated for publishers.

Not only that, but there is also the issue of user data being collected from sites with hopes that it will deliver advertisements that appeal to users. Many, however, are unaware that their data is being collected. You only have to look at the Facebook-Cambridge Analytica data scandal, which saw personal identifiable information collected from 87 million Facebook users earlier this year, to see this.

But what if there was a solution that aims to bring web users, advertisers, and publishers together to deliver a better experience? 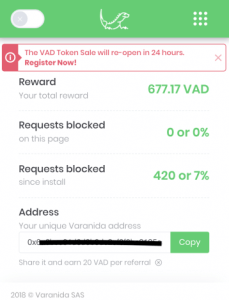 , a digital ecosystem, is hoping to achieve this. Taking its name from Varanidae, which are a family of lizards (including the Komodo dragon and the crocodile
monitor) known for cleaning mangroves and fields, the platform is working at cleaning “the internet of intrusive and poorly designed advertising, while introducing a decentralized, transparent, and ethical ad network,” according to its white paper.

By using the Ethereum blockchain for its prototype, the goal is to benefit the three major stakeholders in the advertising marketplace: give users back their data and privacy, create better revenue opportunities for publishers, and a higher standard advertising model where advertisers can track each dollar spent on an advertising campaign.

Since releasing the prototype, Varanida says that it has seen more than 120,000 registered users download it, claiming it’s a real success for the blockchain project as it strikes a chord with its community.

And in a bid to continue its progress Varanida has launched an initial coin offering (ICO). The platform has a soft cap set at $8 million and hard cap marked at under $40 million. With the organisation’s proposed DAICO model, the hard cap will be set by token holders. However, if the milestones aren’t reached, additional funds won’t be raised. The platform will be releasing one billion VAD (Verified Ad) Tokens to fuel the first iteration of the Varanida Network before it goes live next year.

Round one of the ICO has already taken place and closed; however, round two will open Friday September 29th at 3 p.m. CEST and close Friday 5th October at midnight. Round three will be split into three sub-rounds: 3A, 3B, and 3C. According to a Medium post, Varanida have stated that if the milestones in round three are not reached, then the soft cap will become its hard cap as this will still be enough for the platform to scale. Refunds will also be given if each milestone is not reached.

According to the white paper, “Varanida users will earn VAD tokens each time
they block an ad from a centralized network. This will be done through a
multi-browser compatible extension that enables users to block ads running
on centralized ad networks.”

Not only that, but the platform won’t store users data; however, if users want to be rewarded with additional VAD tokens they can opt in to share their data with advertisers and publishers that they trust. If they chose to do so, Varanida state that it won’t sell this to third parties. Publishers will also be rewarded by earning up to twice as much for the ads that they serve. At present, traditional and centralised advertising networks take around 60% of the total budget in fees from publishers.

“For each ad they display, publishers will earn VAD tokens based on the auction
that takes place in Varanida’s Real Time Bidding platform. Publishers can also
be rewarded by users who like their content and want to ‘tip’ the team behind
that content,” the white paper notes.

Varanida has also acquired Secret Media, a media company, to help it launch the next phase of its product faster.

Go with the FLOW: where to buy Flow as it surges 15%