Home › Latest News › A Broad Overview of Cryptocurrency Activities in 2017 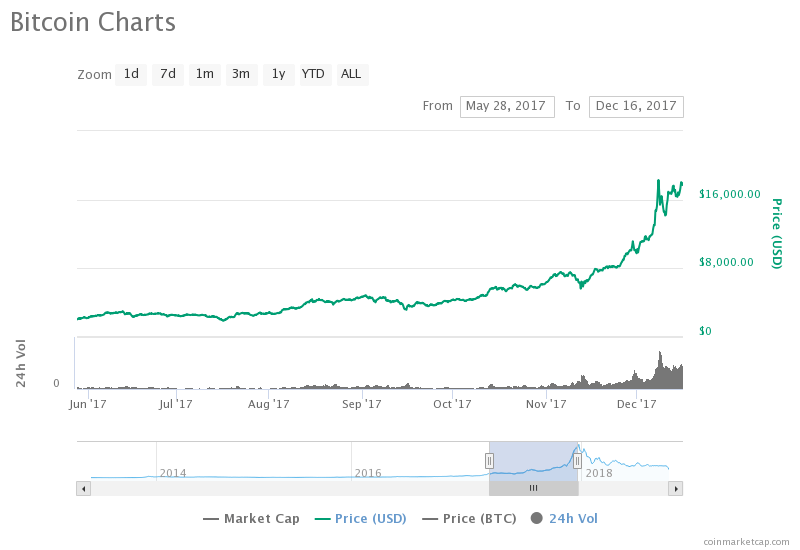 A Broad Overview of Cryptocurrency Activities in 2017

A little over ten years ago, one of the most important whitepapers in the history of the financial industry was released. Written by a man- or a lady- or men- or ladies- under the pseudonym Satoshi Nakamoto and born out of the horror that was left on the world by the financial crisis of 2008, the Bitcoin manifesto introduced the world to a potentially new form of transactions.

The notion of cryptocurrencies brought various advantages over the traditional fiat money. However, chief amongst these advantages would be decentralization; an ability for the currency to function and be used without being censored or monitored by a third party (in this case, financial regulators and banking institutions).

We take a look back at 2017; the year which has been seen by many as the most pivotal in the short- but highly eventful- history of cryptocurrencies.

The major bullish run started in the summer of 2017, as the price of crypto pushed past every milestone with ease. By May, bitcoin had gone over $2,000 for the first time; then it went past $3,000 some days later.

But the volatility never stopped. Some days, it lost $300 in an hour.  By September, the price of bitcoin had gone over an all-time high $5,000. Despite the blanket ban on crypto trading in China and the crackdown on ICOs, bitcoin was able to surpass a record high price of $10,000 and beyond.

August down to December 2017: The Rise of the Crypto Bubble

In general, cryptocurrencies had their prices peak by the middle of 2017. Led by Bitcoin, cryptocurrencies began to move from being on the outskirts of the financial industry to getting into the mainstream world economy. It wasn’t just Bitcoin, though; its closest rival, Ethereum, peaked at a value of $1,100 in December. 2017 was indeed a breakout year for a number of altcoins, chief of which is Ripple, designed as a payment system to be used by financial institutions. It recorded a 36,018% increase in 2017. Others like NEM, Stellar and Dash recorded 29,842%, 914,441%, and 9,265% respectively, according to data from CoinMarketCap.

Speaking on why the total crypto market cap had dropped since 2017, Andrey Alekhin, CEO of exploratory blockchain art lab, Snark.art, commented in a press release sent to CoinJournal. He believes cryptos were used for speculative purposes in 2017. "These entrants haven't even come to the market with a product," he noted, adding:

"Combine that with low liquidity, and you're going to see significant volatility. I think we can expect these types of roller coaster swings for years to come."

What Caused the Boom?
The sudden and astronomical rise in the value of cryptocurrencies attracted unqualified investors from all over the world, some of whom threw in all they had into crypto assets despite having relatively little knowledge about them.

In truth, it worked for most of these people the value of Bitcoin continued to grow, fueled in part by increased media coverage and the greed of even more investors who saw crypto assets as their way of getting rich quick. Various factors tied to the rise of cryptocurrencies and their value. Their acceptance by the Japanese government, the development of national cryptocurrencies (like the “Digital Shektel” from Israel and “Petro” from Venezuela), the endorsement that Bitcoin got from celebrities, and the “Bitcoin fork,” essentially, splits in the original Bitcoin code that led to the development of Bitcoin Cash (BCH) in August and Bitcoin Gold (BTG) in October.

Kalin Stoyanchev, Project Lead at RNDR, a blockchain-based graphics rendering platform from OTOY, sees 2017 as a year of progress. "We are really just now starting to see the potential of crypto in consumer and enterprise use-case,” he noted in the release.

The Chinese Crackdown on Cryptocurrencies
As soon as the impressive run of Bitcoin began in 2017, rumors began to circulate that the Chinese government was planning to crack down on the emerging crypto market. Soon, these speculations became a reality, with the government reportedly placing a ban on both Initial Coin Offerings (ICOs) and any trading that involved any form of cryptocurrencies and the Chinese Yuan.

The Chinese government seemed adamant in their efforts to stunt the growth of the crypto market, and they went as far as restricting cryptocurrency news outlets on WeChat, OTC exchanges owned by Alipay, various crypto-driven events and over 100 foreign exchanges.
Also, Baidu (considered by many to be the Chinese’s answer to Google) was made to mum any discussion on cryptocurrencies.

Mixed Reactions from Notable Businessmen and Investors
While crypto assets enjoyed the support of investors such as John McAfee (Founder, McAfee Associates), Eric Schmidt (Former Google CEO.) and Bill Gates (Co-Founder, Microsoft), there were others who weren’t so optimistic about the rise of the crypto revolution.

Notable among these “pessimists” include Warren Buffet (CEO, Berkshire Hathaway) and Jaime Dimon (CEO and Chairman, JP Morgan Chase). Known as the Oracle of Omaha, Buffett is one of the most respected investors in the world, and while he has been notably silent on cryptocurrencies, he famously dismissed Bitcoin in an interview with CNBC.

Dimon, on the other hand, had been more outspoken about his disdain for Bitcoin and its imitators. At an Institute of Finance conference in October, Dimon said that anyone who is “stupid enough to buy Bitcoin would pay for it one day.”

On the 21st of November, the values of Bitcoin and Ethereum were hit after Tether announced that $31 million was stolen from the company’s treasury wallet by an external attacker and sent to an “unauthorized Bitcoin address.”

Tether, which had created a dollar-pegged cryptocurrency (also known as Tether, with the ticker USDT) claimed that the funds were stolen on November 19th, and that they will not be redeeming any of the stolen tokens.  The incident served to shake the confidence that investors had in the crypto market, and it was a signal that the crypto market wasn’t immune to theft and other malicious practices. After the hack, the bullish run started, which many believe, thanks to an explosive report by Texas Professors, Tether and Bitfinex had a hand in.

December 2017/January 2018: The Bubble Pops
Sadly, the rise in crypto values wasn’t going to be permanent and just like every other bubble; there was a “bursting point.” With Bitcoin, the burst came just a few days before Christmas. After the cryptocurrency reached a record high of $19,783.06, it began to shed its value fast, and just a month later, it had dropped back to $10,000.

Unlike the rise of these assets, the reason for the sudden fall was easy to pinpoint.
Among other things, more cryptocurrencies were being tied to scams, money laundering operations, and a host of other crimes became prevalent. This increase in financial crime led to calls for regulations by various countries, and an increasing fear that countries were going to clamp down on the activities of cryptocurrencies led to a massive outlay of investors.

Looking Ahead: Regulations, and the Current Stance of Various Countries
Countries need to evaluate the impact of cryptocurrencies- as well as the subsequent consequences of restricting or not creating a favorable framework for the blockchain technology to thrive. A lot of countries have made positive moves, some haven't. For instance, while it doesn’t look like China will be backing off their crypto ban anytime soon, Japan has enforced an exchange-licensing regime for cryptocurrency businesses. The Swiss, known for their laxity and freedom as regards financial matters, have decided to let crypto run free in their country.

Still though, most countries- including the United States and Britain- have yet to adopt a clear stance on the state of cryptocurrencies and the potential for regulation. The U.S. Securities and Exchange Commission has however classified ICO tokens as securities, regulated under federal laws, which led to the reduction in companies who can trade ICOs in the U.S.

But, where cryptocurrencies have failed, blockchain has continued to enjoy widespread acceptance, even in China, where the Communist party has formed a series of partnerships with blockchain based startups as it seeks to leverage the nascent technology.

Oliver Carding, founder of CoinJournal and CryptoKaiju, the makers of blockchain based vinyl toys, sees 2019 as the year where the regulatory uncertainty disappears, leaving the doors open to "companies who've been interested but reluctant to get involved with cryptocurrency and blockchain previously."

"I expect the major cryptocurrencies to make advancements in both on-chain and layer two scaling, improving their usefulness and reducing the need for altcoins, which I expect to decline over the next 12 months massively."