Aragon, a platform built on Ethereum for creating and managing decentralized autonomous organizations (DAOs), has unveiled its Transparency Framework which it aims to set as an industry standard. The startup hopes other crowdfunded blockchain projects will follow through and introduce measures to provide investors with greater transparency on how exactly their money are being used.

Initial coin offerings (ICOs), also known as token sales, have raised almost US$1.3 billion in 2017 so far. That’s four times more than traditional venture capital funding with about US$358 million raised over the same period, according to Fortune.

ICOs have proven to be a very effective fundraising method, yet, the lack of transparency in how the funds raised are being used remains an issue for investors.

“While many [crowdfunded blockchain startups] have detailed minimum viable products, they have largely failed to highlight how funds are being used to further their project,” said Luis Cuende, the co-founder and project lead of Aragon.

“Accountability is extremely important for all organizations, especially blockchain projects. Increased transparency of spending will allow token holders to assure them that funds raised are being used productively and responsibly,” he said. “This will instill confidence among them in the long-term vision and trajectory of the project.”

The Transparency Framework shows human readable descriptions of all transactions that a certain project makes, detailing the value, destination and justification for each spend from a wallet. It also includes also a column that shows which owners signed a specific transaction. Particular cases where the privacy needs to be preserved, for instance employees salaries, are not shown. 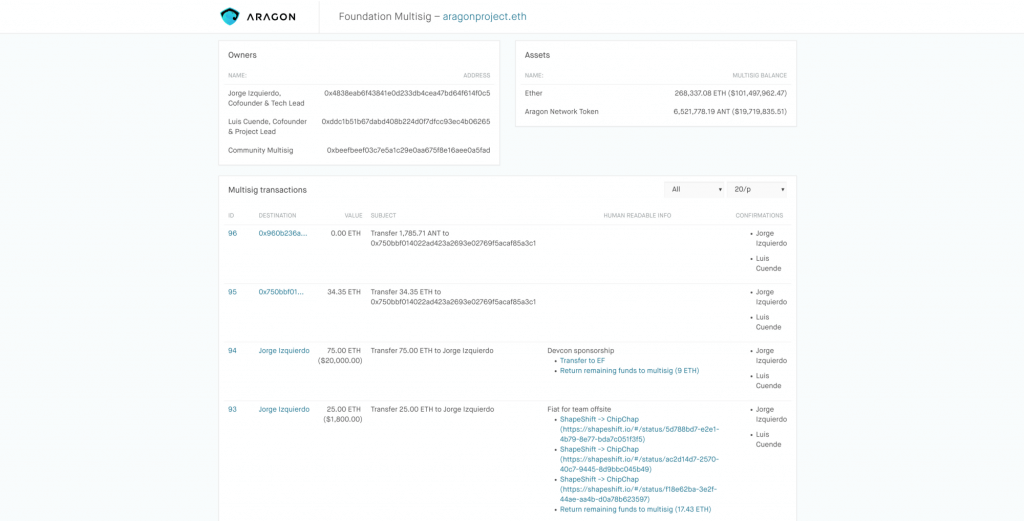 The framework allows contributors of a token sale as well as token holders to inspect and see whether or not a crowdfunded project has been using its funds responsibly.

In addition to its real time Transparency Framework, Aragon has committed to produce quarterly reports detailing the use of funds, organize public meetings, and open source its codes to allow participants’ inclusion in decisions relating to project fund management.

These measures have been introduced with the aim of consolidating an industry transparency standard and intends to serve as an example for other players in the blockchain space, Aragon said.

“Our system was inspired by and is an adaptation of the MakerDao transparency model and is open source for anyone to use,” Cuende explained. “We’re trying to boost the adoption of transparency models by other organizations and make it an indispensable requirement for token sales.”

According to him, the evolution of industry transparency will result in greater efficiency for projects, increased security and involvement for participants. This will “ensure that the ecosystem filters away non-legit projects and enlightens the transparent ones,” Cuende concluded.

Introduced earlier this year, the Aragon platform was developed specifically to disintermediate the creation and maintenance of companies and organizations all around the world. It implements basic features such as cap table management, governance, fundraising, payroll, and accounting, supporting all areas of company management through an user-friendly interface.

Since February, the number of Aragon organizations deployed to the testnet has grown from 130 to currently over 7,500.

Following its successful US$25 million token sale in May 2017, Aragon has grown its team and added Mihai Alisie, one of the original four founders of Ethereum, to its advisory board.