Blockchain companies raised US$1.8 billion through 343 deals during the first half of 2018, a new record for venture capital (VC) investment in the sector that highlights soaring demand from VC firms, according to a new report by blockchain VC firm Outlier Ventures.

The trend has been largely driven by the surge in VC “mega rounds” of over US$100 million. These include Bitmain’s US$400 million Series B round in June that valued the company at a whooping US$12 billion. Bitmain plans to apply for an initial public offering (IPO) in Hong Kong in September. Circle, a mobile payments and cryptocurrency trading company, raised US$110 million in May at a nearly US$3 billion valuation. Circle acquired popular cryptocurrency trading platform Poloniex in February for reportedly US$400 million. 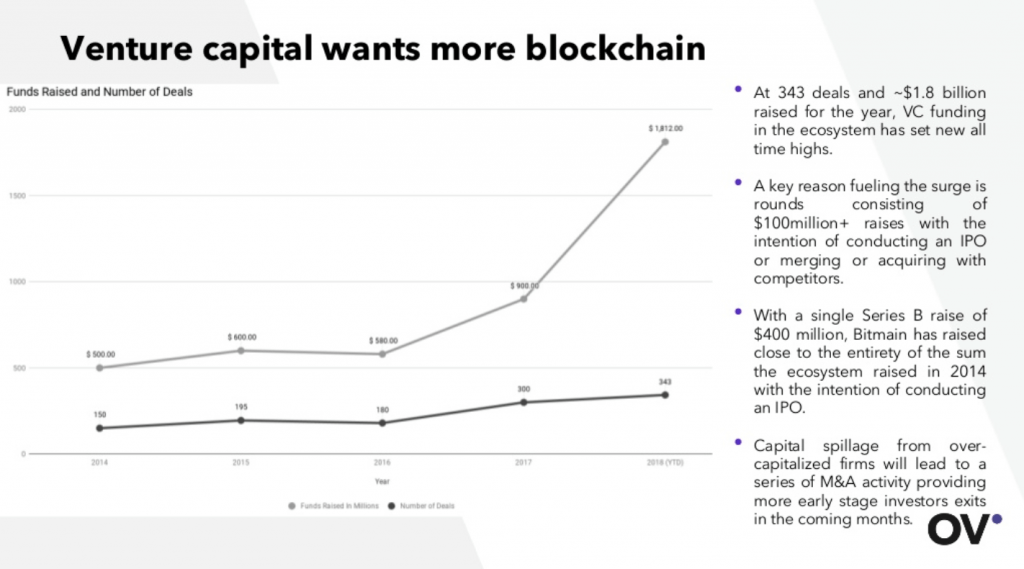 Another key trend this year is the surge in merger and acquisition (M&A) activity. US cryptocurrency trading company Coinbase has been among the most active, acquiring seven companies this year so far, namely Memo.ai, Cipher Browser, Earn.com, Paradex, Venovate, Digital Wealth and Keystone Capital, according to Crunchbase. Other notable M&A deals during the first half of 2018 include Tron’s acquisition of BitTorrent for US$126 million in last month, and Binance’s acquisition of mobile cryptocurrency wallet Trust Wallet. 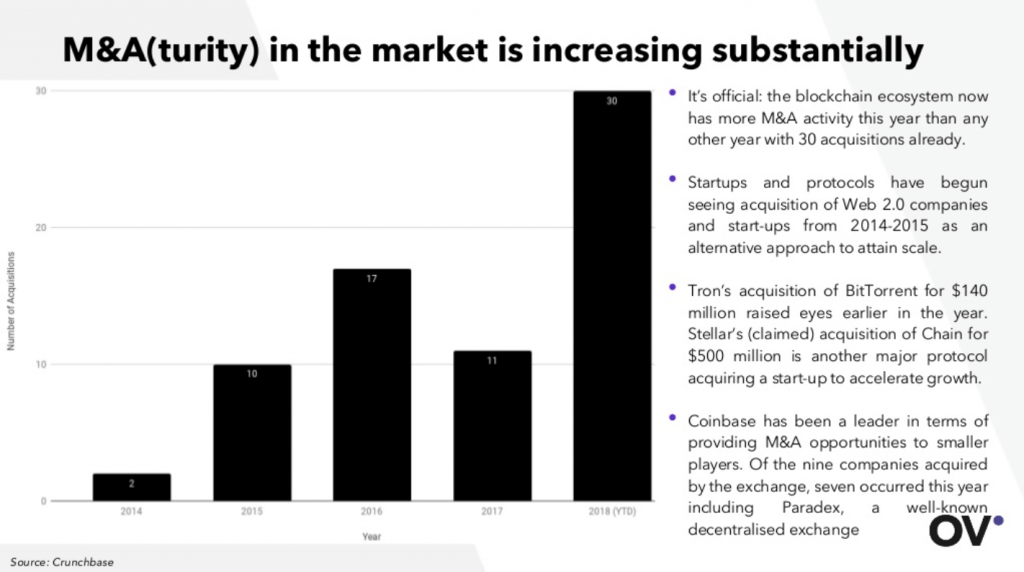 The report also notes the rise of decentralized cryptocurrency exchanges. Idex, Bancor and ForkDelta, the top three decentralized exchanges for Ethereum ERC20 tokens, collectively hold 91% of the market but other smaller ones also exist such as Kyber, Airswap, and Radar Relay, which recently raised a US$10 million Series A. One of the main appeals of decentralized exchanges is that these do not hold customers’ funds, positions or information, and only serves as a matching and routing layer for trade orders.

Meanwhile, a growing number of corporates are getting into the cryptocurrency game: Japanese messaging app Line launched its exchange BitBox in July, popular stock trading app Robinhood integrated tokens into its offerings earlier this year, and Nasdaq CEO Adena Friedman has indicated interest in listing tokens on the exchange.

Another emerging trend is stablecoins, which allow investors to hold and transfer dollar, euro and other sovereign currencies pegged tokens between wallets without the need for a banking intermediary. Currently, there are more than ten live blockchain-based stable currency implementations with Tether leading the market with a current market capitalization of US$2.7 billion.

Circle is working on the USD Coin, a stablecoin that will plug into Poloniex, and IBM and Stronghold launched a cryptocurrency pegged to the USD called Stronghold USD on the Stellar blockchain network last month.