Home › Latest News › Cent Is like ‘HotorNot’ For Brains

Cent is a new project that attempts to blend the gig economy, social media and crypto. Can such a volatile mix work? Founders Max Brody and Cameron Hejazi think so, and judging from my own experience there, I think they are onto something.

If Sci-Fi movies, futurists and political scientists agree on anything, its that the robots are coming for our jobs. This isn’t a new phenomenon. People have been fearing automation for decades. Even before factory jobs were being replaced with robots it was the logical question to ask. If tools are made to reduce work, what happens when our tools are so good, there is no work to be done?

Whatever your answer to that question is, be it universal income, economic protectionism or some crypto-wonderland, there needs to be something in between. So far, the gig economy has helped fill that gap. For all the innovations that have killed off jobs, there are at least a handful that have created new jobs and sources of income. Everything from Uber to Youtube videos to the article you are reading right now, is a form of the new economy.

But some of those jobs are disappearing too. Ask an economist or futurist what they think of an Uber-driver’s long-term prospects. And even the ones that are sticking around aren’t for everyone. What are the odds a former coal miner becomes a Youtube star?

Cent, which plans to add significant (but secret) features soon, currently works like this: There are three main tasks a user can perform: Asking questions, answering questions and voting on answers. Users ask questions and fund the bounty with Ethereum. Different users answer those questions to the best of their ability and then the algorithm pits different questions against each other. Finally the voters scroll down a list and pick which answer they like in a head to head match up against another answer. The answer that gets the most choices wins. Most of the bounty goes to the winner with some going to other answers, voters and a small percentage to Cent itself.

While few people in America are likely going to make a living wage by voting and answering on Cent, every little bit counts. And if your social media time can transform from arguing about what is and isn’t fake news to something productive, then that is a step in the right direction. In third world countries, the relatively small amounts could be life-changing.

And there is something else going on at Cent too. Because people post bounties and then those answers are chosen from the crowd, people have an incentive to answer in a calm, accepting way while still striving for high quality content.

When asked which traditional social media site he would compare Cent to, Brody mentioned Reddit and Quora. And it is easy to see why he made those comparisons. The voting is a bit like Reddit and the answering plus potential monetary reward is like Quora. But I’d like to add an additional comparison, a controversial and highly influential early 2000s site: HotorNot.

Using Cent reminds me of that site immensely. But instead of idlily judging the attractiveness of people, I am judging their mental capability, debating skills and writing competence. Today I voted against a response simply because of their use of “there” when they should have used “their”.

Was that fair? Probably not. But I hate lazy writing and so it was not the response for me. Just as a user may have voted someone as “not hot” for having dyed hair or tattoos or whatever thing they didn’t like, I am free to be as judgmental as I like on Cent.

In truth, Cent is more like FaceMash, the Facebook predecessor and HotorNot clone that had users judging the comparative attractiveness of two Harvard students. But since that app never took off outside of Harvard itself, it’s HotorNot that comes to my mind first.

While HotorNot is credited with influencing the future of the internet and was immensely successful, it always felt a little mean and extremely shallow. Cent, on the other hand, feels like you are improving online discussions every time you use it. You know that feeling you get when someone says something asinine on Facebook? And how it takes a lot of self-discipline to stop yourself from engaging in a fruitless debate that changes no one’s mind? Well, Cent redirects that feeling into a simple button click. Rather than fighting with that person, simply vote for the competing option. If you feel yourself really riled up, you can make your own post and let the crowd decide whose response was better. No back and forth, no insults, just one chance to make your case. Then you can move on with your day. 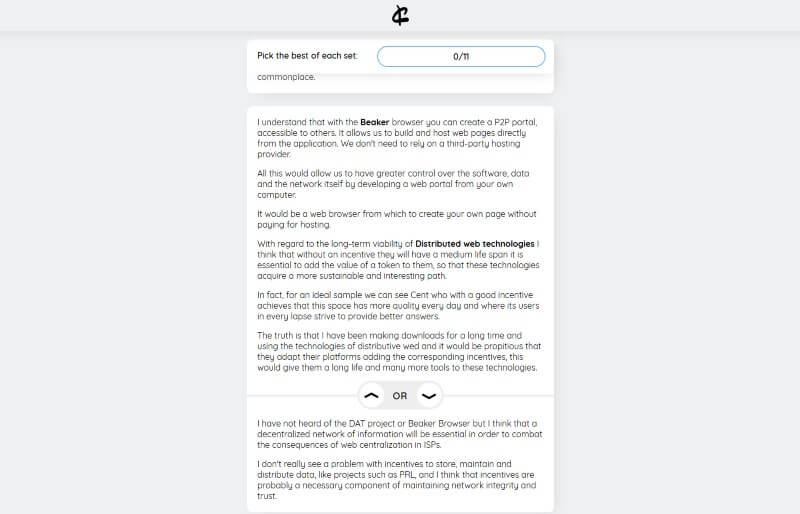 As mentioned, the responses are high quality. The best of them float to the top. It’s a level of discourse I haven’t seen online in years. No one is trolling. The community isn’t (as of yet) an echo chamber. It is just people asking questions and other people answering them to the best of their ability and there is something beautiful about that.

Recent studies have suggested that social media may make us less happy. But Cent as it is currently constructed: high quality discussions and a feedback loop that has real monetary rewards, has a chance to leave us with a better feeling than Facebook or Twitter when we log off.

Succeeding in the Social Media space isn’t easy. Adding a cryptocurrency to that factor isn’t a shortcut to mass adoption. It likely hampers it at this point. Cent has a long way to go and a ton of different paths it could take. It is still in an open beta. It needs to launch its own currency, it needs to make it easier for people to fund their accounts, and it needs to decide exactly what it is going to be. There are hundreds of paths they could take, but will they take the right ones?

Cent will be adding features in the future. Will those features complicate things to the point where they ruin Cent? Or will they add a personal touch to what is currently a very impersonal social media site? It is difficult to know which path they will pick and nearly impossible to anticipate which ones they should take.

But I am having fun. On a social media site that uses crypto. I think that is worth paying attention to, but maybe I’m weird. Maybe I should let the crowd decide.

Polkadot (DOT) could plunge after correction from its recent rally