China’s cryptocurrency clampdown has forced mainland investors and entrepreneurs to find ways to bypass the restrictions. Founders of cryptocurrency projects are now turning to Hong Kong exchanges for alternative listing of their tokens, while investors are exchanging their bitcoins peer-to-peer.

Aurelien Menant, founder and CEO of Hong Kong-based cryptocurrency exchange Gatecoin told the South China Morning Post that the company has experienced a surge in the number of Chinese clients registering on its platform.

“We have received a high number of inquiries from blockchain project founders based in the mainland who would like to list their tokens on our exchange,” he said.

Leonhard Weese, president of the Bitcoin Association of Hong Kong, believes that if China continues to toughen up on regulations, it may drive the business to the city.

According to the Beijing Internet Finance Association, 65 ICO projects were completed in China in the first seven months of 2017, raising about US$398 million. The Chinese central bank said 90% of the ICOs launched on the mainland were fraudulent.

The move was followed by a ban on channels for the buying or selling of cryptocurrencies, forcing exchange platforms several exchanges including BTC China, Huobi and OKCoin to suspend trading service by the end of this month. Domestic financial media outlet Yicai Global reported that China plans to shutter all bitcoin exchanges.

The plan by the Chinese government is said to represent one of the most draconian measures any government over bitcoin.

A blockchain event originally scheduled to take place in Beijing last week was moved to Hong Kong “to lower the risks of being cancelled.”

On Wednesday, hundreds of bitcoin traders and experts gathered at the Hong Kong Grand Hyatt Hotel for the Blockchain Global Summit, a two-day event organized by Chinese Bitcoin company BitKan.

“The event team at BitKan carefully balanced the pros and cons of the risks of Beijing’s city security updates and the ICO supervision from the central bank,” a notice on the company’s website said. “Though we have reported to the local enforcement and there will be no ICO related contents on the summit, we decided to change the time and location of the summit to lower the risks of being cancelled.”

But according to Leon Liu, co-founder and CEO of BitKan, the crackdown has led Chinese investors to come up with ways to trade bitcoin directly with each other, such as through messaging apps.

“You use WeChat, you meet someone, you chat, you buy and sell, you transfer money, nobody knows why you transferred the money. This is everywhere now,” he told the Wall Street Journal. 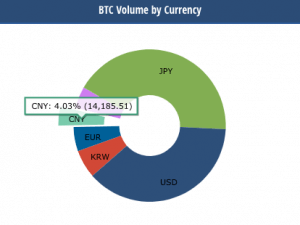 “Exchanges in Japan, Korea, the US and Hong Kong now dominate global crypto-token trading activities after the first major restrictions were imposed on Chinese exchanges in January,” Menant said.

“Most major token sales and blockchain development has happened and is happening outside of China, and major mining operations in Russia, Europe and the US have emerged to challenge their Chinese peers.”

“Therefore, this will have little impact in the longer term future of the cryptocurrency and blockchain token ecosystem.”

Still, the impact of the Chinese crackdown has sent bitcoin prices falling. The digital currency has dropped 33% since the beginning of the month.