The price of bitcoin has fallen 38% since the beginning of this month as Chinese authorities are tightening their grip on cryptocurrencies.

Today, ViaBTC became the second cryptocurrency exchange to announce that it will cease trading on September 30, requesting users to start withdrawing their funds. This followed a similar announcement made yesterday by BTCChina, one of the biggest exchanges in China. BitKan, a leading cryptocurrency trading app, effectively suspended over-the-counter trading on its app on Tuesday.

All cited the recent notice from the People’s Bank of China that banned fundraising through initial coin offerings (ICOs), or token sales.

But for Jason English, VP of Protocol Marketing at Sweetbridge, a global alliance that aims to use blockchain to create a liquid supply chain, the recent news from China might hint at regulations coming soon rather than an overall crackdown on cryptocurrencies.

“It is hard to believe that China intends to exit a market with so much potential upside. Even the apparent ban on ICOs seemed to be more of a stopgap in order to get some policies in place,” English said. “If anything, this example shows the volatility of the space and that some market-makers can likely take advantage of an unclear news cycle to create a sell-off and buy back opportunity.

“China is practically building a cottage industry for mining and exchanging bitcoin and other cryptocurrencies,” he noted.

Tough month for bitcoin and cryptocurrencies in general as a wave of negative news has weighed heavily on the whole market, wiping over US$65 billion in value from the peak of September at nearly US$180 billion. 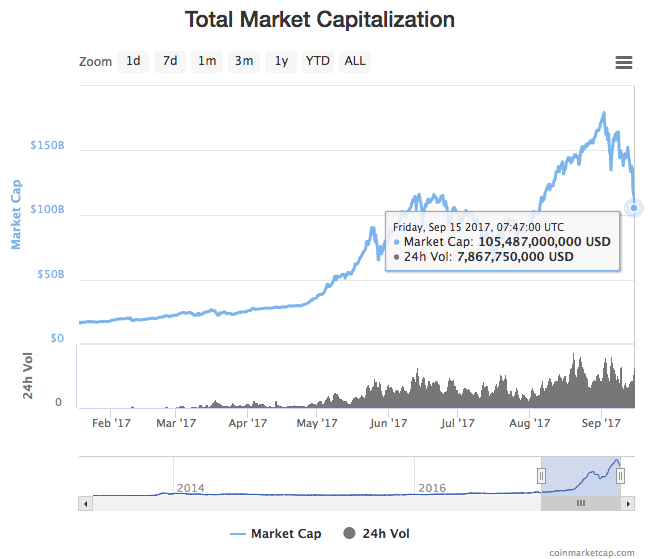 This week at a Delivering Alpha conference, JPMorgan Chase CEO Jamie Dimon called the digital currency “a fraud” and said he would fire any employee trading bitcoin for being “stupid.”

“It’s worse than tulip bulbs. It won’t end well. Someone is going to get killed,” Dimon said at a banking industry conference organized by Barclays. “Currencies have legal support. It will blow up.”

In the wake of his remarks, the bitcoin price fell by about 2%.

“Bitcoin may be a bubble and it may be replaced in the future by other cryptocurrencies,” said Scott Nelson, CEO and Chairman of Sweetbridge. “But comments like Jamie’s show a failure to grasp the significance of the blockchain and the power of brand in a fundamental sea of change.”

“Blockchain might be the big disruptive idea, but Bitcoin itself is a disruptive threat to the big banks. Bitcoin has a different utility from government and bank issued fiat currency. Its popularity amongst investors over the last year is directly linked to increasing understanding of this real-world utility.”

“Blockchain technology and cryptocurrencies have the potential to sweep away all of today’s incumbent financial institutions. We shouldn’t be surprised that this threat sparks extreme reactions from the industry’s top insiders,” Assia added.

The price of bitcoin dropped below US$3,300 on Thursday. The digital currency is now trading at US$3,050, a 27% drop since the beginning of the week. 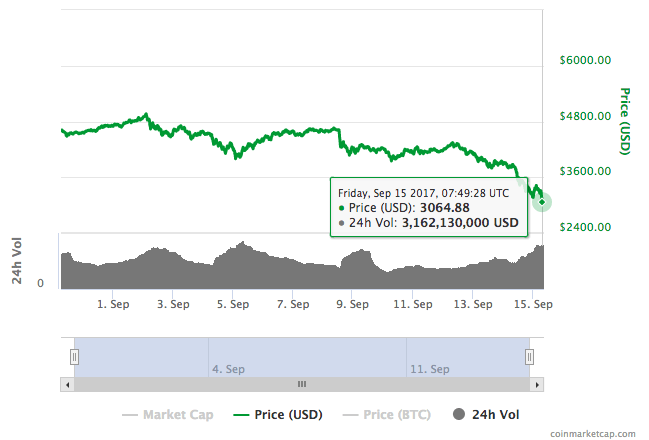