Previous article No, A Country Did Not Just Adopt Bitcoin As Its National Currency Next article

No, A Country Did Not Just Adopt Bitcoin As Its National Currency

Juan Galt, my former colleague at CoinTelegraph, reported at NewsBTC Sunday that a “country” known as Pontinha had officially declared Bitcoin as its national currency. The article came with a podcast/interview with the alleged nation’s Prime Minister and head of Finance, Joby Weeks. Both the short article and headline were extremely misleading and irresponsible and while the interview did provide a bit more context, it too was full of inaccuracies and omitted critical information.

Here is critical information that the original article failed to mention:

Worse than ignoring those facts, the NewsBTC article went the other way, actively making statements contrary to the truth. In the article, Galt calls Pontinha the “smallest country in the world” even though it isn’t a country and he calls it “sovereign” even though there isn’t a political body of note in the world that acknowledges its existence.

Pontinha got some mainstream press after the landowner of the islet, a man named Renato Barros, declared it a sovereign country and himself the ruler and Prince of the Island/Islet. To back up this claim, he had a document given to him by the British family that sold him the land, which stated that the former King of Portugal had sold it to them in 1903 with its “possessions and domains” meaning the owner of that document had absolute ownership of the island. That monarchy was thrown out of office in 1910 and the King was exiled from the country.

The small islet is of historical significance. It sits just off the coast of the relatively larger island of Madeira, which is a autonomous regions of Portugal, with its own elections and government. The ruins of a military fort from the 1700s sit on Pontinha and at one time Crucifixtion nails from Roman times, thought by some to be the nails that crucified Jesus Christ, were found there. It also sits next to the island of Madeira’s most significant port, meaning that allowing it to be its own country could prove to be problematic.

So, one could understand the Madeiran government as well as the Portugal government being hesitant to let a man and his family take Pontinha and secede entirely from the Country. Especially since the document comes from a Monarchy that lost control of Portugal over a century ago. It would also send a strange message to the Maderians, who don’t yet have complete independence from Portugal themselves.

Nevertheless, Barros decided to go forward with his claim to sovereignty and a legal battle ensued in 2007. That is where the trail of Pontinha’s legal status goes cold. I couldn’t find any information on the outcome of the supposedly pending court case and UN application. By all indications visible to me, Pontinha has yet to be recognized as an independent state by any nation or governing authority. Barros posted a petition in 2010 to his Facebook, that asked that the government of Portugal recognize Pontinha’s independence, but after more than five years, it only has 127 signatures.

I am unsure if Pontinha is still in the legal process of attempting to become a country or if Barros has abandoned that goal. Barros’ Facebook indicates that he still considers himself the Prince of the so-called country, but if he is pursuing that in court, it isn’t immediately clear. I sent a message to Barros asking the current status, but did not hear back.

Regardless of how you feel about Barros’ claim to sovereignty, the point is that his independence and Princedom has not been recognized by anyone of note. There is no commerce to speak of and the only indication that Pontinha (or Atlantis, as Barros has taken to calling it recently) is “accepting” bitcoin is a laminated piece of paper Barros placed on the cave’s entrance, and that looks far from permanent. 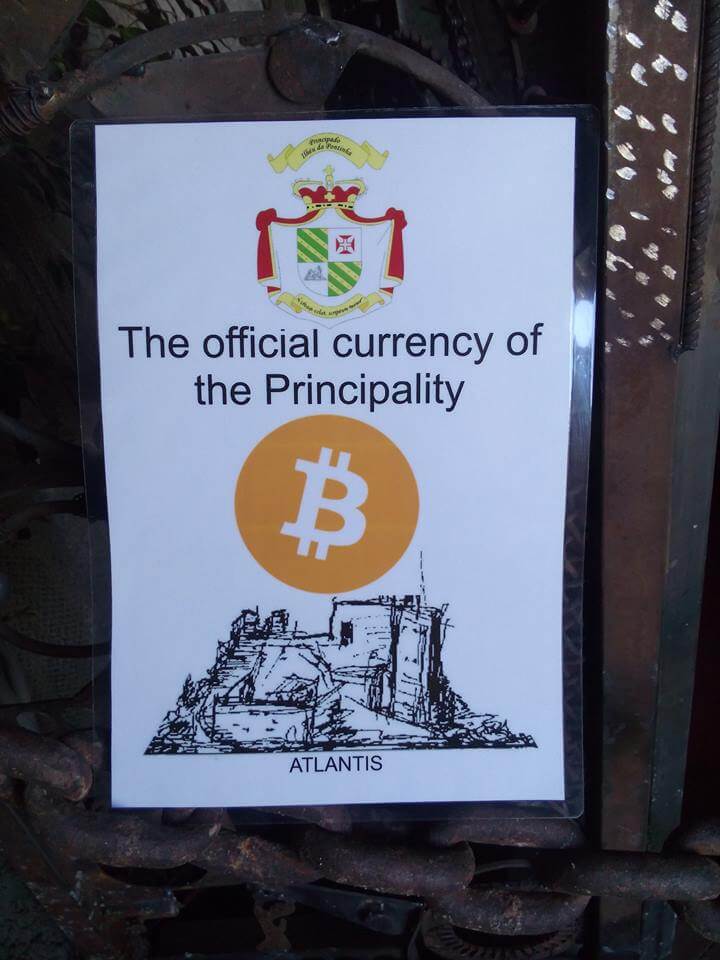 Even if it had sovereignty, there isn’t much point for a country to have a currency if it has no economy. Since Barros allows “tourists” to enter his “domain” for free, and there are, as mentioned, no shops or services on the islet at all, the entire GDP of the theoretical Pontinha economy is $0.

Galt mentions several possibilities for Pontinha’s bitcoin “adoption” including e-residency, bank branches and anchor corporations. But without any recognized legal standing, all of those actions would be subject to the Madeiran government’s regulations, which means they will never happen.

So why report on it at all? Why make a big deal over what is essentially a man who calls himself a prince and told the world that Bitcoin is the official currency of his vacation home?

It is something that infects not just Bitcoin media, but all of the lower brow internet media outlets. A liberal interpretation of the facts in order to grab more eyeballs. I understand that sensationalistic headlines have been a part of journalism since its invention, but ignoring key facts for the sake of creating buzz about a story crosses a line that shouldn’t be crossed. Unfortunately, what passes for journalism in Bitcoin crosses that line all of the time.

It is a common practice at NewsBTC, which has consistently shown it favors hits over both journalistic integrity and bitcoin’s well-being. Earlier this year, they republished reports from disreputable German tabloids as facts, while linking Bitcoin to ISIS. Sunday’s article was no different. Both were articles that seemingly took the source at its word with no attempt to verify or check the facts. That it is an attempt at making positive news, rather than something that links Bitcoin to ISIS, makes it only marginally better. Linking bitcoin to a silly concept like Pontinha (or Atlantis) and an absurd person like “Prince Barro” makes Bitcoin look less than serious.

It is time for Bitcoin journalism to get serious.

How to stay safe from NFT scams