Home › Latest News › Government, Not Data-Thieves, Is Why The War On Encryption is Insane

This year, a more sinister war is brewing. It is one that was fought before, and back then the good guys won. But like an uninspired Michael Bay sequel, the bad guys are back with the same tricks and increased hyperbole. I am talking about the war on encryption. The first encryption war was fought in the early 90s. Then, the NSA, FBI and various other fear mongers from our government attempted to put hardware back doors into our cell phones and potentially more, until public outrage and the insecurity of their “clipper chip” killed the plans.

During the Democratic Presidential Primary debate, Hillary Clinton called for a Manhattan Project to break encryption. She says the government needs to work with the tech community to build in backdoors so that encrypted communications can be monitored by the government.

The Manhattan Project descriptor is a reference to the then secret program dubbed the “Manhattan Project” that led to the discovery of the Atom bomb. It is the exhibit A example of how the government can do the impossible, in this case split the atom, if it is determined and puts enormous resources behind it. There have been plenty of calls for “Manhattan Projects” to fix problems in our society, but this might be the first time someone proposed it as a solution to what they see as the encryption problem.

Clinton says she has a lot of “faith” in tech leaders to solve the puzzle of giving the government access without giving cyber-criminals access. But those same people have stated unequivocally that it is impossible. As Anton Chuvakin, a research VP at Gartner’s GTP Security and Risk Management group described it to NBC News,

“Since encryption is derived from math, can you create a math puzzle that only ‘a good guy’ can solve?”

Anyone with a basic understanding of how encryption works will understand this concept. If there is a master key that unlocks all the doors, hackers only need to run the mathematical calculations to create that master key and everyone’s encryption is compromised. Other solutions, if they even exist, would run up against the same problem: any place the government could squeeze through, so could cyber-criminals.

But there is a bigger issue with Clinton’s assertion that encryption is a problem and it is far more sinister than any cyber-criminal: the government shouldn’t be trusted with everyone’s communications regardless if they are properly encrypted or not. The government, when given access to information, has proven over and over to be incapable of handling that information in a responsible way.

While much of the government, our representatives mainly, are theoretically beholden to the wishes of the people through the voting process, other parts of the government aren’t Thousands of government positions remain static through elections and generations. For the most part, it is harmless. We don’t need an election every time a new department needs a new bean counter, but some of these entrenched people hold very powerful positions in the government and our elections have little to no bearing on who holds them.

The intelligence branches of our government is one that rarely sees turnover, and when it does it is almost never at the behest of the voters. Their past history proves that they often place their own interest above the citizenry. Some of their scandals were direct attacks on privacy, others were just a misuse of tax payer funds for programs most tax payers would have been vehemently against. There are too many intelligence community scandals to list here. Three programs in particular, showcase just how far the intelligence community is willing to go to influence public policy, regardless of what the public itself wants: Project MOCKINGBIRD, Project CHAOS and COINTELPRO.

The CIA’s Project CHAOS and the FBI’s COINTELPRO were extensions of what the intelligence community had been doing since, at least, the early 1950s. Operation MOCKINGBIRD was the first known program that was intentionally and openly (within the confines of the intelligence community) designed to spread disinformation in order to push their agenda.

The CIA covertly worked to undermine the world’s free press by putting hundreds of foreign and national journalists on their payrolls and used them to distribute propaganda. More notorious than that sounds, MOCKINGBIRD was at least partially responsible for the overthrow of Jacobo Arbenz Guzmán, the democratically elected president of Guatemala. He had won more than 80% of the vote after being a major figure in the overthrow of a (US installed) brutal dictator and ran on a platform of reforms and independence from foreign influence.

Despite Guzmán’s popularity with Guatemalans, he was replaced at the behest of the CIA with a US friendly dictator, Carlos Castillo Armas. Besides removing the right to vote from nearly half of his populace and forcing peasants off their land, Armas is best known for creating what is generally recognized as Latin America’s first death squad of modern times. MOCKINGBIRD was exposed in the 70s but how long it ran for remains unclear.

In 1956, the intelligence community stepped up their efforts to change public opinion and focused it inward. COINTELPRO and Project CHAOS were run by the FBI and CIA respectively and reached their apex in the late 1960s and early 1970s. Ostensibly designed to combat the communist party, both programs were instead used to target the civil rights movement, the anti-war movement and any other elements that were considered possible agitators.

There were an incredible amount of activities performed in these two programs that had nothing to do with national security and everything with using the intelligence they gathered to target and attack popular figures who they determined to be harmful to American culture.

The most egregious, was their monitoring and attacking on Martin Luther King Jr. King. At the direction of FBI head J. Edgar Hoover, the FBI targeted Dr. King in order to neutralize his affect on the civil rights movement. The program intensified after his famous “I have a dream” speech and led to William Sullivan, who was in charge of the FBI’s domestic surveillance program, to say this about Dr. King (via Washington Post)

“Personally, I believe in the light of King’s powerful, demagogic speech, he stands head and shoulders over all other Negro leaders put together when it comes to influencing great masses[.] We must mark him now, if we have not done so before, as the most dangerous Negro of the future in this Nation from the standpoint of communism, the Negro and national security.”

The program monitored Dr. King and eventually led to them sending him a letter that portrayed itself as being from a black man. The letter detailed the agency’s knowledge of Dr. King’s infidelities and urged him to kill himself. 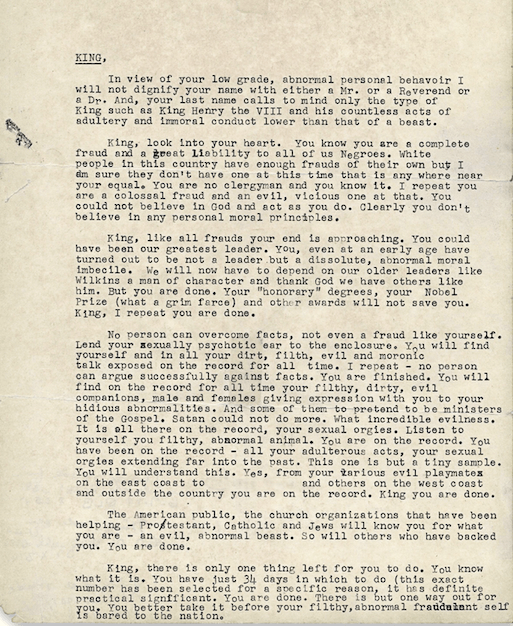 To this day, many people believe that the FBI has some involvement with the assassination of Dr. King, but the files that investigated the murder have been sealed since and will remain sealed until 2027.

The attack on Dr. King is well known but it was hardly the extent of COINTELPRO. It also targeted Abbie Hoffman, Bill Ayers and other anti-war leaders. Muhammad Ali was also targeted as well as seemingly unrelated movements like the American Indian Movement.

Project CHAOS has fewer visible controversies but was arguably more nefarious as the CIA was supposed to be regulated to foreign intelligence gathering operations but instead turned their sights inward to illegally spy on thousands of American citizens who were never accused of any crime.

This may not seem so extreme in today’s environment, where we are all unfortunately used to the idea that the government is watching all of our electronic communications at all times. But simply because something has become commonplace doesn’t make it morally justifiable and what those programs prove is that the government will use the information it gathers not only to protect us from threats, but also insulate themselves from a changing culture.

Today, our culture is changing rapidly, and it is primarily due to the rise of electronic information in the form of the internet. While Hillary Clinton’s assertion that the tech community needs to develop a form of encryption that only the government can break is indeed impossible as most tech leaders assert, but the debate shouldn’t be limited to if it can be done, it has to include if it should be done.

The government has proven over and over again that it puts the interests of the powerful over the interest of their average citizens. The Founding Fathers put a clause in the Constitution giving the populace the right to bear arms, in part to be able to fight off tyranny. Today, our best weapon against tyranny is communication. There is a reason Turkey tried to ban twitter and China keeps its population behind the Great Firewall, the spread of ideas is far more dangerous to entrenched interests than any gun or bomb could be.

In order for ideas to develop and grow, there needs to be a space where people can talk freely. It is difficult to speak your mind if you think that authority figures may be monitoring you and any “dangerous” comment could get you placed on a list.

That is what the war on encryption is really about: our right to have private conversations. The government isn’t just monitoring our electronic communications but possibly our in real life conversations as well. Programs have been exposed that show they have the ability to turn on our mics and cameras on our cellphones, even when we think they are off.

Effective encryption, like that found in PGP, is essential to preserving our right to private conversations and we need to do everything we can to protect that right. The encryption of Bitcoin is needed to protect our financial privacy. We need to do this, not just because of what cybercriminals could do, but what the government has already proven they are willing to do.

[Apologies to anyone looking for a bitcoin related story on this bitcoin news site, but it is Christmas and encryption is mildly related, so give me a break.]