Is Iota (MIOTA) the next cryptocurrency to explode in 2021? If you are seeking Bitcoin or Ethereum-type returns, Iota coin might be worth a look. It is among the few altcoins with real-life applications and some experts believe that it has enormous potential as an investment.

Iota price has climbed nearly 300 per cent in 2021 even after accounting for the recent crypto crash. The altcoin has outperformed Bitcoin and is doing better than Ethereum this year. What is the Iota price prediction for June 2021 and is it a good investment now?

There is renewed interest in cryptocurrency investing after El Salvador president Nayib Bukele revealed plans to make bitcoin a legal tender in the country. Government acceptance bodes well for the future of cryptocurrencies because of the potential to drive broader adoption as payments and investments.

Iota is Outperforming Bitcoin in 2021 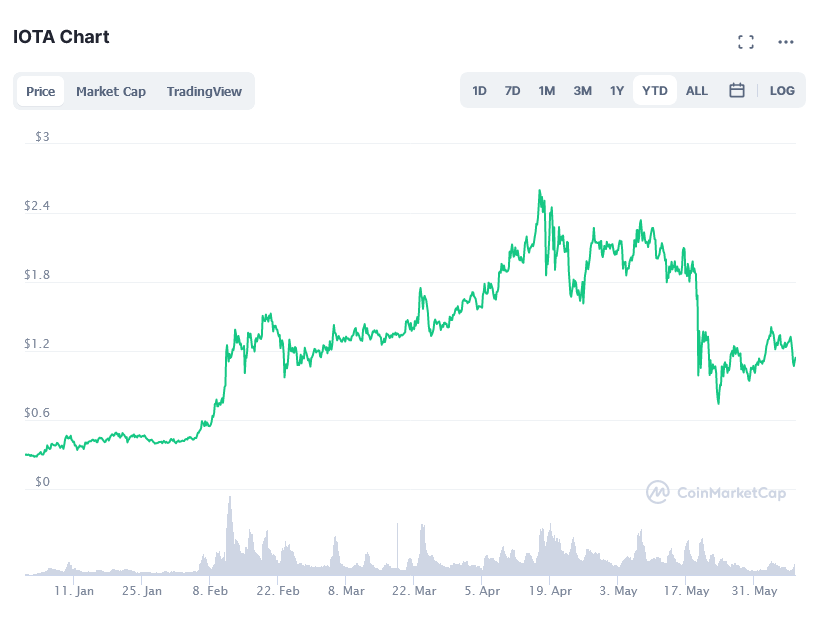 It is important to familiarise yourself with Iota as you assess its price prospects. The Iota project is run by the Iota Foundation, a non-profit entity. Being a non-profit is not the only characteristic that sets Iota apart from other crypto projects. It also doesn’t use blockchain as you know it. Instead, the Iota network uses a proprietary technology called Tangle.

The network was launched in 2016. Miota is the network’s cryptocurrency. There are 2.8 billion Miota coins in circulation and that is the maximum supply.

Where to buy IOTA (MIOTA) today

What is the current Iota (MIOTA) price? 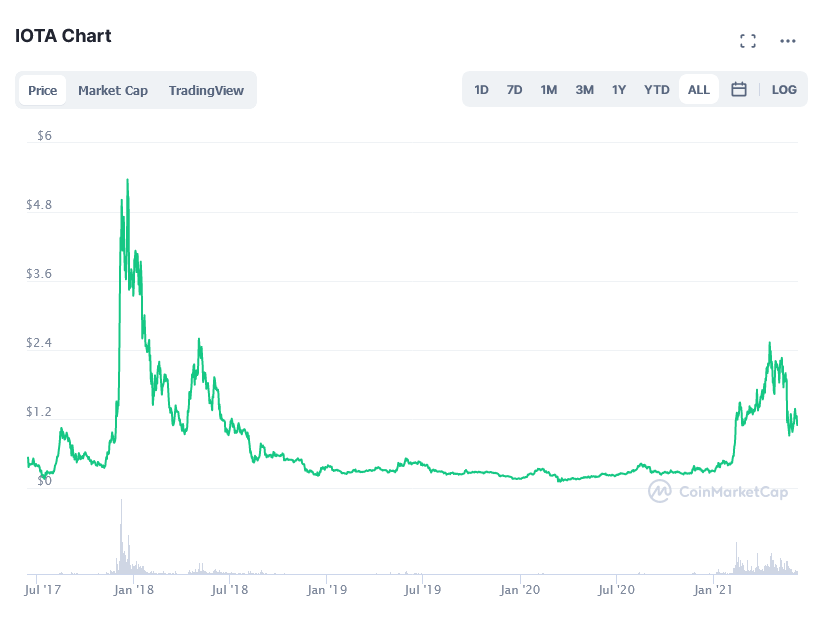 Considering Iota’s sharp move lately, investors are eager to know its price outlook. The altcoin’s daily gains have averaged 1.5% in the past five months. If it maintains that growth rate, it could reach $1.50 in June, suggesting a nearly 40% upside to the current price. If the daily gains accelerate to 5%, Iota price could hit $3.20 in June, implying more upside potential. 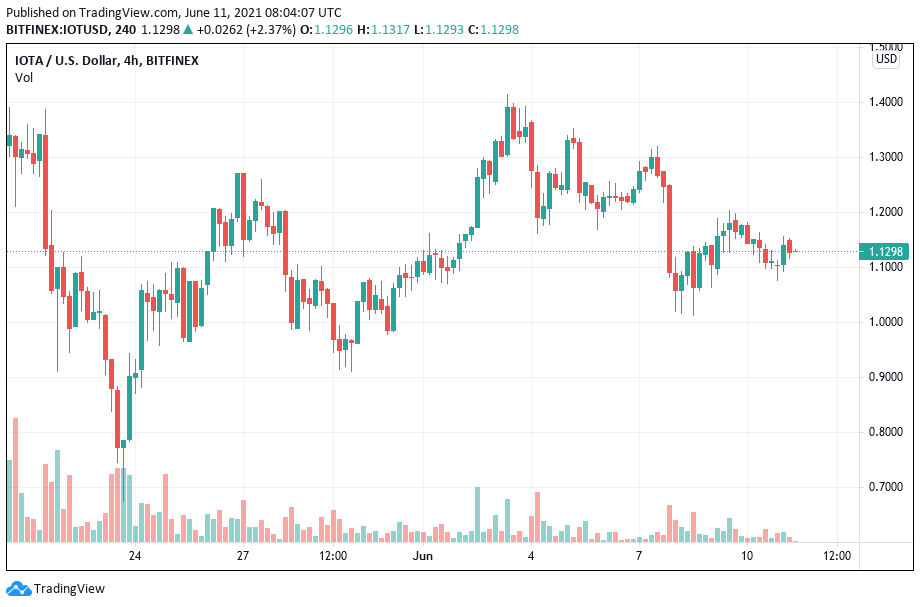 As the bulls appear to be on course to discover a new high now, it may only be a matter of time before Iota storms past this critical resistance. The trend has been largely positive in recent days, with Miota price sustaining above $1.05 since pulling up from the June low of $1.02.

Several factors could drive the Iota price higher in June. These range from network upgrades to inflation protection with capped Miota coin supply. Below is a look at the factors behind Iota’s bullish price prediction in more detail.

Iota upgrading to a decentralised network: Iota recently took an important step to become a decentralised network with the launch of IOTA 2.0 DevNet. As an IoT-focused system, Iota’s technology is valuable to enterprises in areas such as digital identity, supply chain tracking, global trade, and smart energy. Decentralisation will enhance the network’s security and in turn, pave the way for broader adoption of the network.

The network is also set for advancements that will improve speed, scalability and reliability. All these improvements have the potential of fueling Iota network adoption and increasing demand and value of Iota cryptocurrency.

Partnerships of power: Iota has struck multiple partnerships and continues to seek more partners as the team works to fuel broader uptake of the IoT-focused network. For example, Iota signed Volkswagen to use its technology in its connected cars. Few crypto projects have secured an endorsement from such big global corporations.

Even governments are on board with Iota’s technology. Taiwan’s capital Taipei turned to Iota to help it roll out smart city solutions. In what could open up more partnership and business opportunities, Iota recently joined The International Alliance for Mobility Testing and Standardization alongside dSPACE and The Transtec Group.

More IoT devices, more demand for Iota technology: Iota has solved many shortcomings of conventional blockchains. It has become the go-to-platform for running IoT transactions. That puts it at an advantage to benefit from the expanding IoT ecosystem. According to IHS Markit, the number of IoT devices globally is set to reach 125 billion by 2030 from 27 billion in 2017.

No value dilution risk: Iota crypto has already reached its maximum supply. That has removed value dilution risk and makes Miota coin attractive to investors seeking inflation protection. Also, with the supply cap already hit, the token’s price will only go up as network adoption expands.

Cheap entry point: Seeing how Bitcoin and Ethereum have risen in value, many investors are encouraged to start small and wait for their investment to grow. Iota is among the cheaper altcoins with a lot of breakout potential.

Is Iota a good investment?

Longtime Iota investors are a happy lot. The crypto boasts a lifetime return of 184,250%. It means that $1,000 invested in Iota immediately upon its launch would be worth more than $1.8 million today.

Even those who put their money in Iota at the beginning of 2021 are looking at impressive returns of 264% despite the recent crypto crash. It means that an investment of $1,000 in the altcoin in January would be worth more than $3,600 today.

The 80% pullback in Iota price from its all-time high implies an enormous upside potential when the crypto begins to make its way back to the top. Also, Iota’s pending addition to Coinbase also bodes well for its price prospects.

Coinbase is one of the largest crypto exchanges in the US and is trusted by big investors, including Tesla. It partnered with PayPal to expand access to crypto investing. Securing Coinbase listing would expose Iota crypto to more investors, particularly the funds, potentially fueling price rise. Furthermore, the merger announcement of getting listed there is enough to lift the price in what has come to be known as the Coinbase effect.

Please note, the above is a purely opinion-based piece, based on relevant data available. It should not be deemed as direct investment advice.