As most cryptocurrencies remain in the red, Bitcoin Cash BCH/USD has jumped by 4.20% in 24 hours. Its parent, Bitcoin, has lost 0.11% in the same period. BCH could book more gains in the next few days as the token remains bullish.

Bitcoin Cash is not discussed on the same wavelength as its parent, Bitcoin. The latter retains the top spot of being the most popular cryptocurrency. Its hard fork, Bitcoin Cash, only ranks at position 29 by market cap.

A review of Bitcoin Cash shows that it exhibits similar price movements as Bitcoin. However, as Bitcoin recovered lately, BCH remained subdued. That can be explained partly by the fact that investors flock to Bitcoin whenever macro concerns ease. A slowdown in inflation in July gave hopes of a calming macro environment that boosted Bitcoin.

However, macro concerns are far from over as the Fed hinted at further rate hikes. Investors could look at BCH as a cheaper alternative to Bitcoin, which is getting hit by macro issues. A price recovery above $110 is a potential trigger for further gains.

BCH towering above $110 but remains below a descending triangle 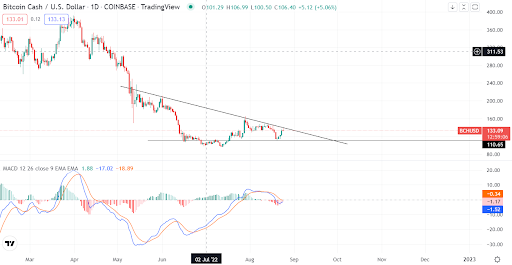 A technical outlook shows BCH rising above the $110 support zone. The cryptocurrency has met resistance at the descending trendline. The momentum indicator is bearish, but a potential MACD bullish crossover is developing.

Since BCH has kept the $110 support intact, a bullish case exists for the token. The price is showing signs of going higher. Investors should watch for a potential breakout of the descending triangle for a chance to accumulate.