Home › Latest News › Bitcoin is Closing in On Its Transaction Capacity Limit, For Real This Time

Some individuals in the Bitcoin community have been worried about the prospect of full blocks for quite some time now. In perhaps the most notable example of this fear of full blocks, former Bitcoin developer Mike Hearn quit working on the P2P digital cash system entirely after his preferred solution to the perceived issue of increased congestion on the Bitcoin network was not adopted.

In a blog post published in January of last year where Hearn concluded that Bitcoin experiment had failed, Hearn claimed, “The block chain is full.”

While the Bitcoin network has encountered a backlog of transactions on multiple occasions over the past year, it’s now getting closer to a point where every new block will be completely filled.

The Declining Availability of Block Space

According to data provided by Blockchair Lead Developer Nikita Zhavoronkov, there was usually over 300MB of unused block space available per week at the beginning of 2016. At an average transaction size of 225 bytes, 300MB leaves space for nearly 1.4 million other transactions. 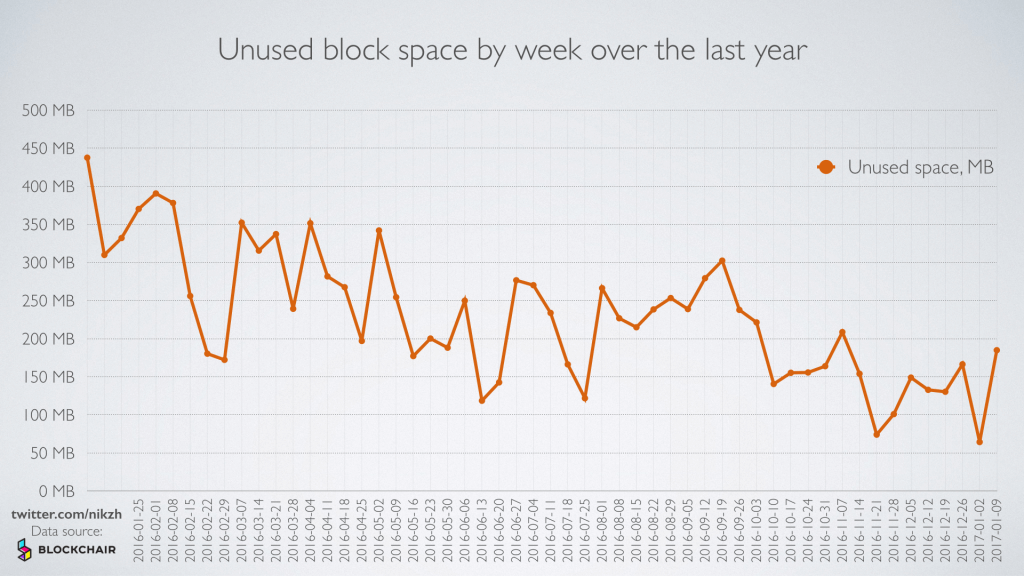 By the first full week of 2017, there was roughly 60MB of unused block space available. This is enough room for around 40,000 more transactions per day.

In fact, the average block size was greater than 984KB for four days in a row in the early days of 2017.

The real amount of block space available on a daily basis is also affected by miners mining empty blocks. Empty blocks are blocks that do not contain any transactions unrelated to the block reward because the miner built on top of a previous block header without knowing which transactions are supposed to go into that block. 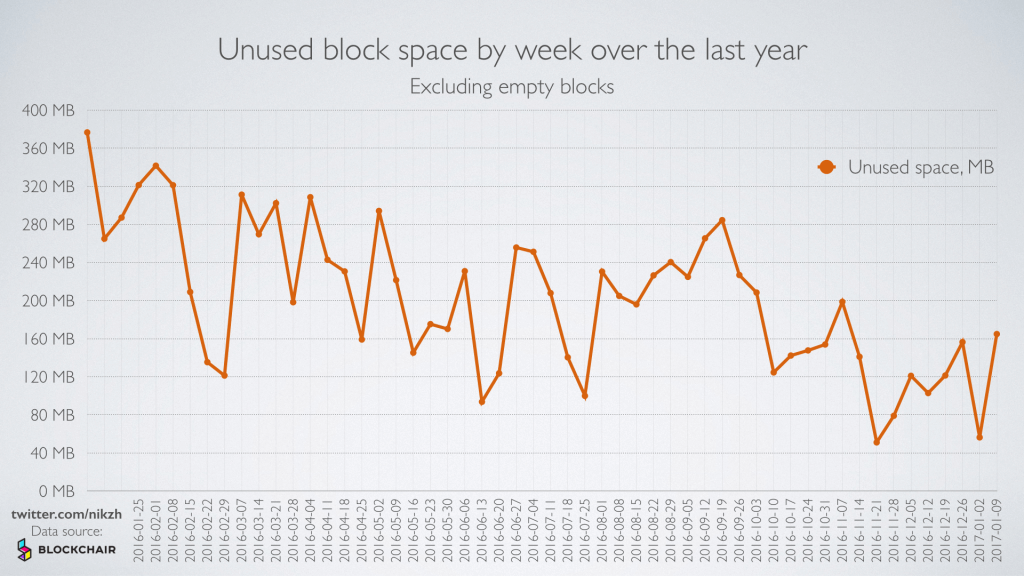 Having said that, the number of empty blocks mined has declined since its peak in November 2015.

What Happens When Blocks are Always Full?

So what will happen when blocks are perpetually full? Mike Hearn wrote another blog post before he left the Bitcoin community where he predicted Bitcoin would become “the MySpace of digital currencies” if this scenario was allowed to play out.

Hearn cited Dave Hudson, who is the vice president of software architecture at PeerNova, in his post, who had done some calculations on the probable outcomes of a situation where blocks are always full. CoinJournal reached out to Hudson to get his perspective on the prospect of perpetually full blocks in Bitcoin.

In Hudson’s view, the likely outcome of a situation where blocks are always full will be that those who are willing to pay the highest fees will basically see no change in their use of Bitcoin; however, those who do not increase their fee payments will notice delays. “I’d like to model this properly, but I’m pretty certain that this is how things will pan out,” added Hudson.

Hudson shared a mixture of viewpoints on whether not a full-blocks scenario will be good or bad for bitcoin. “As for whether this is or isn’t a bad thing, I think there are several conflicting views to take into account,” he said. “On the one hand it’s definitely in the long-term interests of the network to see mining weaned off the block reward as a primary source of mining revenue, but on the other it does mean that the real costs of transfers are going to be seen by people sending transactions.”

Hudson noted that the next block reward halving will result in total miner revenue dropping by 900 bitcoin per day. If the number of transactions on the network per day were to remain the same (roughly 300,000), then miner revenue would need an extra 0.003 bitcoin fee per transaction to remain stable.

“That sort of fee level is definitely putting Bitcoin’s main chain way out of it’s original planned goal of being electronic cash, certainly as far as any sort of normal retail payments are concerned,” said Hudson. “If we assume 1 bitcoin is equal to $800, then our mean fee would be $2.40, so we’d need to be talking about quite large amounts of cash to make this truly worthwhile.”

In general, Hudson’s views differ from those espoused by Hearn in his post about bitcoin’s possible crash landing caused by full blocks. “I’m not quite so sure that block capacity will cause a crash and burn,” explained Hudson. “A serious crash might be possible, but I suspect that it would have to be a result of some other catastrophic event or events. I’m much more inclined to believe that full blocks will simply change the nature of what people value placing in blocks.”

Hudson added that he believes there is a lot of merit to analogizing the perception that full blocks will lead to Bitcoin’s downfall as “nobody goes to that restaurant anymore because it’s always crowded.”

“I speculated that fees would increase as block capacity got used up as this would be a natural way to ensure quick first confirmations,” added Hudson.