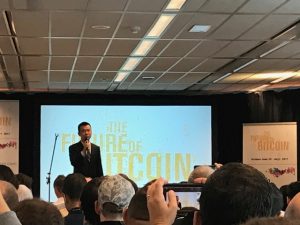 Bitmain is the largest producer of bitcoin mining hardware in the world, and the company’s co-CEO Jihan Wu gave the keynote speech at The Future of Bitcoin Conference 2017 on Friday. During the talk, Wu outlined some of the key innovations he would like to see adopted by the Bitcoin network to help it grow over the coming years. Among the points made by Wu during his presentation were the need for smart contracts, economic incentives for full nodes and stakeholders, and the use of extension blocks to bring experimental features to Bitcoin.

Bitcoin is Missing Out on Smart Contracts and ICOs

Initial coin offerings (ICOs) built on top of Ethereum have been one of the biggest stories in cryptocurrencies over the past couple of months, and Wu would like to see this sort of innovation come to Bitcoin.

Wu noted that he was an early investor in ASICMINER, which was a bitcoin mining hardware manufacturer that raised funds on unregulated, bitcoin-denominated stock exchange GLBSE. GLBSE was effectively a centralized version of the current ICO craze that operated in 2011 and 2012.

Wu recalled how GLBSE abruptly closed down at one point, which caused a number of issues for those who held assets on the trading platform.

“It was chaos because the capital table of the virtual company on the website became unknown,” said Wu. “No one could prove that he owns certain shares of a certain company.”

GLBSE was not the only attempt at an unregulated bitcoin stock exchange over the years, and other examples include BTC-TC, Bitfunder, and Havelock Investments. Due to the legal ramifications of running this sort of centralized stock exchange, Wu is of the belief that these sorts of assets should be issued on a blockchain, which is what has been seen on Ethereum via the ERC20 token standard.

“The ICO [market], I know, right now is quite crazy and there are a lot of scams,” said Wu. “But if you want to create a kind of decentralized economy, then you want to allow those entrepreneurs to raise money from the public without regulations.”

In reality, there are already a number of different ways to issue new tokens on top of the Bitcoin blockchain. For example, here is a tutorial for how to launch a new token via the Coinprism wallet. Having said that, a more complex scripting language is needed to create the sorts of decentralized applications that have been touted by Ethereum supporters.

In terms of smart contracts more generally, Wu noted that Bitmain first invested in RSK, which is an Ethereum-esque sidechain to Bitcoin, back in 2015.

“As a community, we have to admit that Bitcoin is a little bit late [to] this innovation,” said Wu.

Later in his talk, Wu mentioned that ICOs may be useful as a way to fund Bitcoin protocol development in a transparent manner. Although RSK did not launch via an ICO, the startup intends to generate revenue through the use of a developer fee for transactions on their sidechain. While not mentioning Blockstream by name, Wu stated that those who work on the Bitcoin protocol should not conceal how they intend to make money from their open-source development endeavors.

Wu also discussed the need for economic incentives for participants in the Bitcoin network other than miners.

“One very important competing blockchain just redistributed the miners reward to long-term coin holders and their full node operations,” said Wu. “That’s the kind of model where you incentivize everyone to store coins over the long term, make judgments about the technical improvements for the long term, and to contribute to the community.”

It’s unclear which competitor to Bitcoin Wu was discussing here, but he indicated that Ethereum has implemented these sorts of solutions, which means he may have been discussing their intended move from proof-of-work to proof-of-stake.

Wu added that many bitcoin users view the features offered by Ethereum as scams, but he thinks there could be some important innovation there. In his view, many ideas are not tried on Bitcoin at least in part due to the monoculture around protocol development.

Finding an economic incentive to run a full node has been a topic of discussion in the Bitcoin community for many years, but not solutions have gained widespread support at this time.

One last area of discussion covered during Wu’s talk was the concept of extension blocks. Extension blocks are an idea that have been around for years, and Wu indicated that they could be useful in safely adding new, innovative features to Bitcoin.

Wu mentioned smart contracts and Mimblewimble, which is a proposed method of bringing tremendous scale and privacy to Bitcoin, as two examples of features that could be brought to Bitcoin by way of extension blocks.

It should be noted that the original sidechains white paper included a section on the risks associated with extension blocks.

Wu concluded his speech with a call for more experimentation in the Bitcoin development process. “It’s quite easy to introduce bugs in Bitcoin protocol implementations,” he said. “Most of the software will fail, but we have to try to be successful.”

PROS price has defied gravity. Is the Prosper coin a buy?

Accepts customers from the USA
Deposit $100 and get a $10 bonus!* Build a diversified portfolio with crypto, stocks, and ETFs — all in one place.
Trade on the world's leading social trading and investing platform
Open My Account