Blockchain startup Codex has unveiled its provenance-based protocol that aims to tap into the US$2 trillion arts and collectibles (A&C) asset class.

The company is building the Codex Protocol Title Registry, a decentralized title registry for the A&C market comprised of Codex Titles. A Codex Title will include records of the ownership and transmission history of the idem since the Codex Title was instantiated, and hashes of related documents such as photographs, past appraisals, receipts and restoration records. 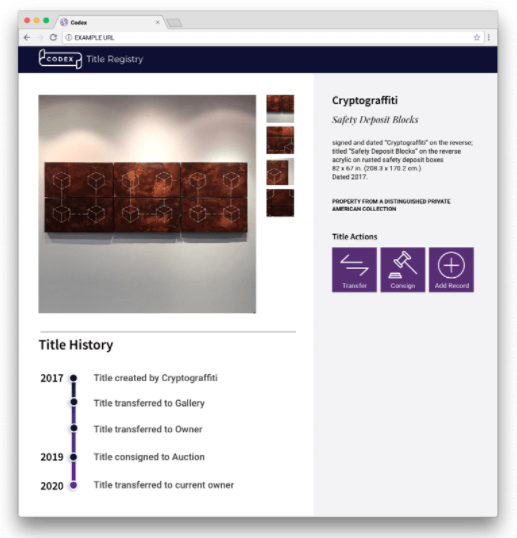 The open source Codex protocol will also allow third-party players in the ecosystem to build applications and utilize the title system and will be powered by the BidDex token.

According to Codex, unlike every other asset class, the A&C market, which includes art, fine wine, collectible cars, antiques, decorative arts, coins, watches, and jewelry, among other things, is lacking a central title registry. This makes it difficult to determine ownership, hampering the ability to buy, sell, securitize, insure, and lend against the asset class.

“The global art and collectibles market is approximately US$2 trillion, yet today there is no way to prove who owned what, when,” said Codex CEO Mark Lurie. “This is especially important in art and collectibles, because almost the entire value is based on provenance and authenticity. Collectors have always balked at disclosing their assets to a central authority.”

“Now, with the blockchain, they can prove ownership without compromising privacy. This will enable art and collectibles to flourish as a financial asset class, resulting in a larger, better, and fairer market for collectors, intermediaries and artisans.”

Codex’s first product and landmark application, Biddable, will be a title-escrow system built on the Codex Protocol. Biddable will enable bidders to instantly and privately bid in auctions by depositing BidDex tokens into a smart escrow contract, which deters reneging. 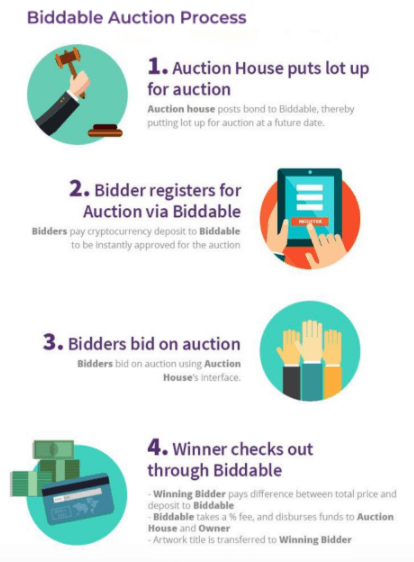 Codex is backed by LiveAuctioneers.com and AuctionMobility.com, the leading marketplace and software providers, respectively, to the A&C market. Advisors to the Codex Protocol include Brook Hazelton, Christie’s President of the Americas, and Fabrice Grinda, a founding partner of FJ Labs.

“The first priority of any auction house is its clients, which means delivering authentic items and making bidding easy for buyers, and maximizing proceeds for consignors,” said Hazelton.

“Decentralized applications hold immense promise to make the auction process easier, more trustworthy and more accessible, especially to the growing amount of cryptowealth around the world.  It’s no surprise to me that industry players like LiveAuctioneers.com and AuctionMo bility.com are embracing and supporting the Codex Protocol and Biddable.”

Codex claims it already has a commitment from over 5,000 auction houses to adopt the protocol and accept its cryptocurrency as a payment method.