Bitcoin industry heavyweight Coinbase has announced the introduction of a new index fund which will allow investors to gain weighted exposure to all of the cryptocurrencies trading via their order-book exchange GDAX. The new index fund is initially only open to US accredited investors, but the company reportedly plan to establish a collection of funds to appeal to a wide variety of investors.

Securing exposure to Bitcoin and cryptocurrency markets has been difficult for many traditional institutional investors, in part due to the challenges associated with handling private keys and mitigating exchange counterparty risk. As a result, the landscape of the Bitcoin market has been primarily dominated by retail investors for most of its history. Following the launch of US regulated Bitcoin futures markets at the end of 2017, the announcement of a Coinbase Index fund under a new Asset Management arm further suggests a maturing cryptocurrency market, with an increasing selection of innovative financial products. Coinbase has proven it is committed to working with regulators and authorities such that useful new investment products can continue to be developed to facilitate greater access to the nascent cryptocurrency market. The company has also been on a notable hiring spree, with a slew of new executives joining including ex-NYSE Head of Finance, Eric Scro and Emilie Choi from LinkedIn who joins as VP of Corporate & Business Development.

It has been somewhat disappointing to see multiple applications for Bitcoin ETFs (Exchange Traded Funds) rejected and withdrawn over the last couple of years, however, the Coinbase index fund is similar to an ETF in many regards, as some of the most popular ETFs are simply tracker funds which seek to replicate major market indices such as the FTSE100 or S&P500. There appears to be a clear desire from investors for access to Bitcoin through more traditional investment vehicles, with a growing number of exciting offerings emerging, including ETNs and funds from Coinshares and the popular Greyscale Bitcoin Investment Trust (GBTC).

The methodology behind the construction of the fund is outlined in a full document, but, put simply, Coinbase have crafted an index-based fund which will rebalance according to the total market value of the digital assets included. This will allow a wide variety of investors to gain exposure to the cryptocurrency market for a modest 2% annual fee, with a well-regarded industry player handling the complexities of securely managing the digital assets. As of the launch of the fund, it will consist of Bitcoin, Litecoin, Ethereum and Bcash with the following allocations: 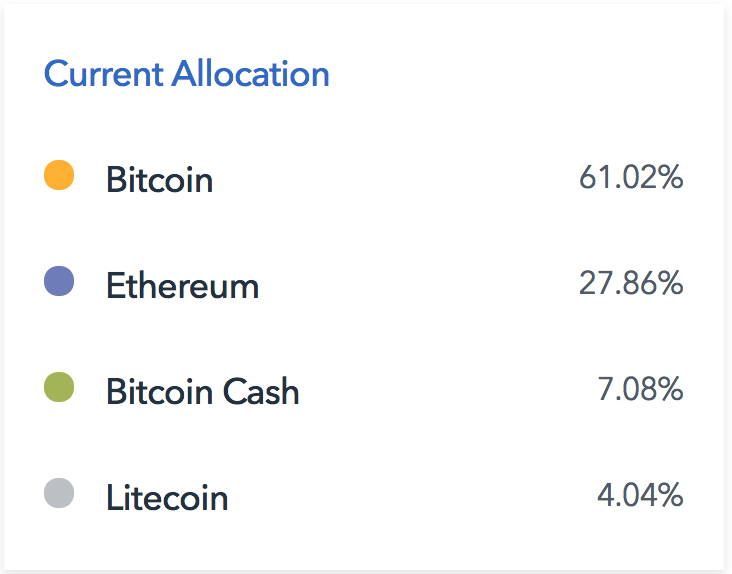 US accredited investors can submit their information to be contacted by Coinbase as soon as applications are open.