DYNO is a blockchain-based data marketplace for sports and metabolic data. It is based on the leading technology developed by DYNOSTICS, an established health-tech company with more than 45,000 users in over 26 countries worldwide. Its customers include renowned brands such as CleverFit and RedBull.

The company was founded by CEO Stefan Bartenschlager and CFO Peter Schweiger, who lead a team of serial entrepreneurs with vast experience in the industry. In 2014, they decided to build an advanced analytical device with the help of  Manfred Günther, a sports science expert in the diagnosis of professional athletes. The device eliminates the need for regular diagnostics at low-tech and expensive sports medicine centers. More importantly, it gives users real-time, personalized diagnostics based on their own performance and metabolic data.

In order to achieve this, Stefan and Peter reinvested over $4 million from previous fitness projects after their experiences made them aware of an important gap in the industry: the data on all training, nutrition, and lifestyle products relies on standardized metabolic values. For Stefan and the team, the fact that these values aren’t based on individual users is a fundamental flaw. Each person is different and should be diagnosed according to their own singular conditions.

The DYNOSTICS device launched successfully in 2016 and was designed to use the method of spiroergometry, “the parallel examination of reactions of a person’s heart, lung, vascular and metabolic system while under physical stress.” It is composed of an oxygen mask and a pulse belt. When users breathe into the mask, sensors measure the air volume to determine their metabolic data. This is paired with performance data received from the pulse belt and sent to the DYNOSTICS cloud. Once received, all the information is interpreted algorithmically and presented in a user-friendly format on the app. In a matter of minutes, the test offers users detailed information on how to stay healthy and reach fitness goals. They can use it to determine how they process food, which diet to follow, and how to best burn fat. 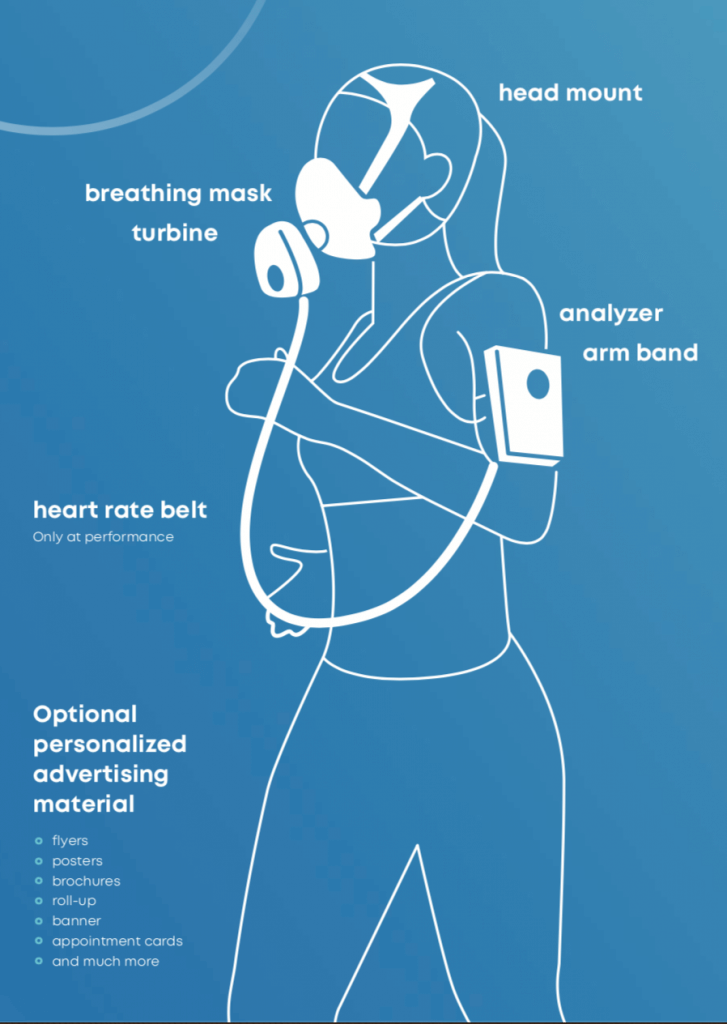 Many companies have become DYNOSTICS customers for its ease-of-use and the need for its tailor-made diagnostics. Recently, the team visited the Red Bull Performance Center in Thalgau, Ausrtria, to deliver its first device to Dr. Bernd Pansold. The doctor advises major Red Bull athletes such as Sebastien Vettel, who would have access to the diagnostic that is tailored to the conditions of a superstar Formula One driver.

However, in no way are these services meant to be exclusive to professional athletes. With DYNOSTICS, the same personalized evaluation that is available to world-renowned sports figures is more beneficial to amateurs and enthusiasts. In a recent interview, Manfred, Dyno’s Head of Sports Science, made it clear that, “Our goal is to bring the analysis methods available to pro-athletes, to the masses. Over the next decades, we wish to improve the health and nutrition of millions around the world. Based on our track record, we feel confident that we’ll be able to achieve this goal.”

This mass-appeal has resonated with popular fitness studios such as Barry’s Bootcamp, which are also looking forward to work with DYNOSTICS’ technology. The team met with the studio’s VP of Sales in California where they agreed to roll-out the device in all Barry’s locations in the United States.

DYNOSTICS has been in the midst of similar deals as their product continues to gain traction. An important partnership was signed recently with an Oregon-based athletics brand. More details are expected.

The growing use of DYNOSTICS analytical device has lead the team to develop an important improvement to their services. All the highly-sensitive data that is being collected needs to be stored in a reliable way, where users remain in complete control.

In their own words, “While we developed a game-changing device, we felt we could go one step further. With all the data we collect from our devices, we became increasingly aware that we needed a fair, safe, and secure way to store that data. With the advent of distributed ledger technology, it became clear that DYNOSTICS could break new ground by developing the first blockchain-based marketplace for sports and metabolic data.”

The upcoming DYNO marketplace provides this convenient solution. Data gathered by DYNOSTICS will be stored in an immutable, tamper-proof, decentralized ledger, where it can be shared or sold at each individual user’s discretion. Users retain complete ownership over their data and will be able to dispose of it anonymously. More so, potential buyers for their data include hospitals, universities, research institutes, and insurance companies that will transact with users through the DYNO ERC20 token. After an initial run, the DYNO blockchain marketplace will also be open to third-party devices.

The pre-sale for DYNO tokens is now open to applications and a public sale will be announced soon. To find out more visit the DYNO website and join the community.