Ethereum started the final week of May 2020 with a positive outlook as bulls pushed it above a short term dip to climb above $204 for the first time in two weeks.

After struggling at $200, the altcoin erased losses below the psychological level to also invalidate a double top that had curtailed moves above $205 over the previous session.

A decline to $201 on May 26 threatened to push it lower as an intraday low of $198 on the hourly charts opened up support at $180. However, the breakdown on the hourly timeframe was followed by a morale-boosting 5% upsurge, which pushed the price of ETH to $208.

Ethereum also obliterated resistance levels at $210 and $214 to hit a local high of $220 on May 28. A consolidation period followed over the next two trading sessions before a breakout above the 61.8% Fibo opened a vertical to highs of $243 on May 30.

With Ethereum active addresses and Ether longs hitting new all-time highs over the week, the second-largest cryptocurrency was primed for a retest of $250 as we headed into the last day of the month.

Anthony Sassano, the Product Marketing Manager at Set Protocol noted that “57% of the total [Ethereum] supply has not been moved on-chain for over 1 year with [approximately] 16% not moving in over 3 years.” It adds to the bullish sentiment about the cryptocurrency, which might wait to surge for when ETH 2.0 approaches. 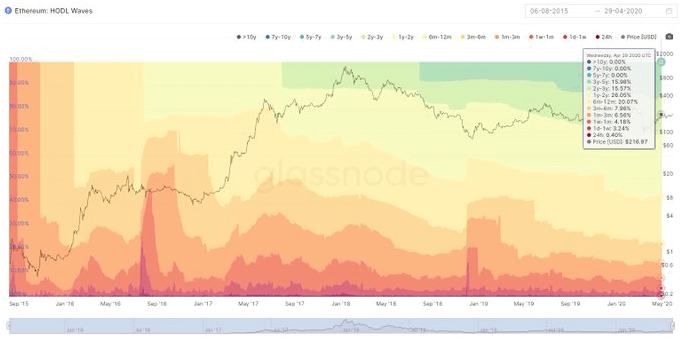 But Ether bulls appeared to run out of gas. Despite an intraday high of $244, a minor retracement meant prices dropped 4.5% to lows of $230 on Sunday, May 31.

The ETH/USD pair currently trades at $238 and could retake $250 if bulls ward off sellers to retain the upper hand.

Ripple has been in a downtrend for much of May, with the token’s market performance in the past seven days continuing that descent. The 7-day period ending May 24 saw XRP close the week 4.5% lower as prices broke below $0.20 to test lows of $0.19.

A break above its 100-day EMA took the cryptocurrency to levels above the major resistance zone at $0.20, which also served as a break above consolidation.

The weekly price for XRP is 5.4% in the green, with any further upsides likely to push the coin’s value beyond yesterday’s highs.