Home › Latest News › LSK Gets Listed On BitFlyer And Huobi.pro Ahead Of Relaunch Event

LSK, the utility token underpinning the Lisk platform, has been listed on BitFlyer and Huobi.pro, a move that comes just a few weeks before its scheduled relaunch event later this month which will unveil an updated and improved Lisk platform and a new brand identity and website.

LSK is the token that powers the Lisk network. The cryptocurrency currently stands as the 16th largest in the world by market capitalization at US$1.59 billion. LSK is trading at about US$13, down nearly 54% from January 01’s price of US$20.

“Today’s announcement caps a very successful week for Lisk, following Wednesday’s debut of our LSK token on the BitFlyer exchange,” said Max Kordek, co-founder and CEO of Lisk. “The addition of LSK to the Huobi.pro exchange elevates the status of our platform as we approach our relaunch event on February 20, in Berlin, and strengthens our ambition to be the enablers of innovation, making blockchain technology more accessible to everyone.” 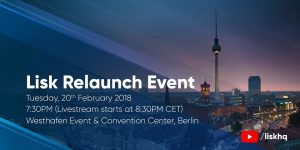 The relaunch event will see a brand new Lisk desktop and web app, which will include the new Lisk Wallet and features from Lisk Explorer, new user interface designs, and new branding. Lisk Nano and Lisk Explorer will be discontinued following the rebrand.

Kordek said the focus has been on improving the user experience of the Lisk client “to a level not seen before in the blockchain space, marking a first step for common user adoption, unifying our whole ecosystem visually.”

“Until now, Lisk has been concentrating its resources on the development of the back end. We have released many optimization, stability and security updates to date marking the significant progress the platform is making,” said Kordek. “Now, our attention moves to making visible changes to our current ecosystem.”

An official event will take place at the Westhafen Event & Convention Center (WECC) in Berlin on February 20, and a livestream will be available. Partnering agencies and the core Lisk team will provide details of the relaunch process and showcase the improved platform, new brand identity and website.

Lisk is a blockchain application platform that enables users to develop applications from scratch using JavaScript. The decentralized platform also allows for the deployment, distribution and monetization of sidechains on the Lisk blockchain. The network operates using a Delegated Proof-of-Stake consensus model, secured by democratically-elected delegates.

Lisk is overseen by the Lisk Foundation, a non-profit foundation based in Zug, Switzerland.

Since late-2017, the team has been pushing to increase its presence in Asia. Kordek said in an interview in December 2017:

“We’re a European project and we’ve been to America a few times, but we feel that Asia is huge.

“It has the largest population in the world, as well as the biggest blockchain adoption in the world, and we decided we want to make a market entry to three new countries: Japan, India and Korea. We also want to strengthen our bonds in China.”