The rise of the digital currency market is continuing its upward trajectory, with the combined market value setting a new record of over $300 billion during trading Monday.

Figures from CoinMarketCap show that the total value reached $305.3 billion at 07:47 UTC on the 27th November. 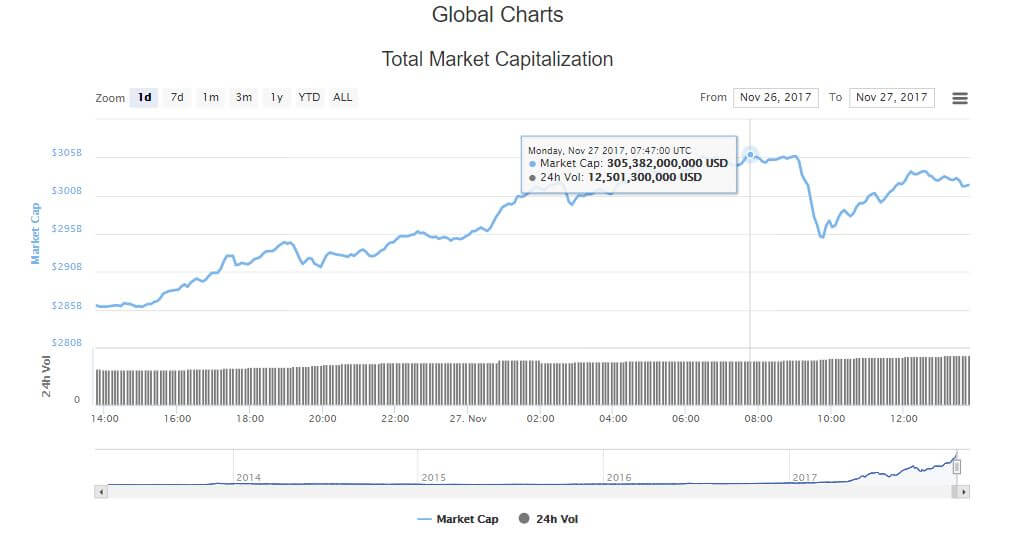 As a result of this rise in value, the combined market cap is now more valuable than Visa ($255 billion), Wells Fargo ($267 billion) and the Bank of America ($279 billion), according to Google Finance.

The combined market rise comes at a time when the value of digital currencies are experiencing a surge in price. Bitcoin saw its value pass $9,700, at $9,790, for the first time, pushing its market cap value up to $163.5 billion, during Monday morning trading. Second-place ethereum, which has been flirting with the $300 mark for some time, saw its price rise to within touching distance of $500 for the first time, at $493.

With unprecedented heights being reached, can the combined cryptocurrency market surpass that of JPMorgan Chase, currently valued at $343 billion?

Jamie Dimon, CEO at JPMorgan Chase, has been vocal about his feelings toward the digital currency market, in particular, bitcoin. In September, he famously called the cryptocurrency ‘a fraud’, which was later followed up with the claim that it was ‘worth nothing.’ No doubt if the combined market cap were to pass JPMorgan’s Dimon would have something to say.

Nevertheless, despite Dimon’s negativity toward bitcoin that isn’t preventing the Wall Street bank from considering helping its clients trade bitcoin futures. Once the CME Group launches its bitcoin derivatives contracts next month, JPMorgan may provide its clients access to it.

Last week, The Wall Street Journal cited someone familiar with the matter as saying:

“JPMorgan is considering whether to provide its clients access to CME’s new bitcoin product through its futures-brokerage unit.”

Some feel that bitcoin will continue to rise even higher. Ronnie Moas, founder of Standpoint Research, believes that it will reach $14,000 in 2018. This is a revised price target from his earlier $11,000.

In a note to clients last week, he said:

“There have been many positive developments during the last five months and a few of the obstacles that were in bitcoin’s way have been knocked down.”

However, while confidence appears to be gaining within the market, according to Frank Holmes, the chief executive officer at U.S. Global Investors, it’s not possible to know which digital currency will survive, reports CNBC.

“What bitcoin has done, it has woken up everyone to the power of the blockchain technology, like emails woke everyone up to the Internet,” he added. “At the beginning, people didn’t trust the Internet. So we don’t know who’s going to survive.”