Over the last quarter, a number of fintech sub-segments, including robo-advisors, insurtech and blockchain, have gained significant traction, according to a new report on venture capital investment in fintech by CB Insights and KPMG. Blockchain and insurtech in particular were among the big winners during this quarter, and these areas will continue to gain momentum, the firms predict.

During Q2’16, interest in blockchain technology has raised significantly as a number of banks and financial institutions from around the world have started focusing on proof-of-concept initiatives, moving from initial ideas to pilot testing of solutions.

“A lot of local financial institutions in China have started to collaborate with fintech companies in areas such as artificial intelligence, biometrics and blockchain to rapidly prototype and pilot innovative products and services,” said Irene Chu, partner and head of high growth technology and innovation group at KPMG in Hong Kong. “We anticipate this trend will continue for some time.”

2016 saw large funding rounds going to blockchain companies. More precisely, among the 15 largest VC fintech deals of 2016, three went to blockchain startups: Circle Internet Financial, which raised US$60 million in June to fuel its expansion into China; Digital Asset Holdings, which raised US$60 million in January; and Blockstream, with a US$55 million Series A funding round. 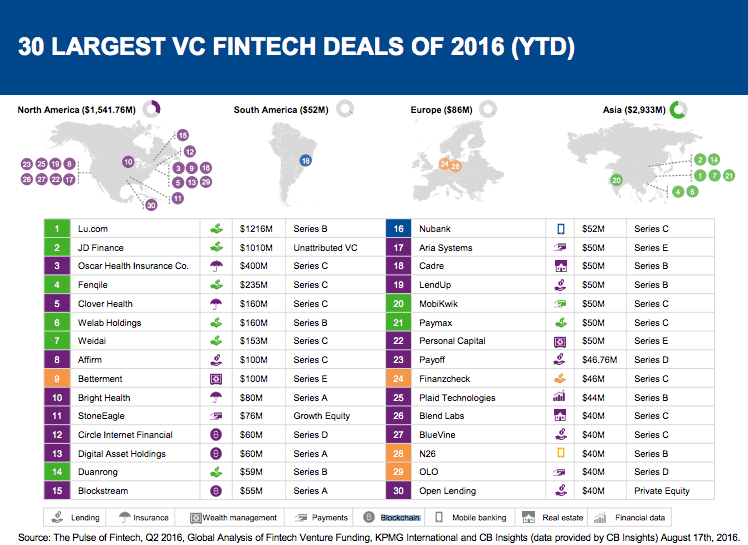 The report dives into innovation in the insurance sector, an industry that is ripe for disruption. Today, a number of insurtech companies are harnessing cutting-edge technology from other industries to develop and enhance insurance offering.

Some are using the Internet-of-Things to provide risk identification and mitigation; others leverage blockchain and smart contract technology as a mechanism for providing automatic payouts accurately, efficiently and at a reduced cost.

“While such activities are still in their infancy, many investors are excited about the potential opportunities for the future,” the document reads.

“There is expected to be an increase in the use of blockchain and smart contracts, data analytics to provide more customer insights and the use of the ‘Internet of Things’ and wearables to enable more effective insurance operations.”

According to Murray Raisbeck, an insurtech expert at KPMG in the UK, low levels of consumer trust, high competition, declining profitability and challenges around legacy IT systems have made the insurance industry ripe for disruption.

“Insurtech is increasingly enabling insurers to solve these issues through new and emerging applications in P2P, blockchain, IoT and SaaS,” he says.

Although global funding to VC-backed fintech company has dropped significantly during this quarter – hitting US$2.5 billion across 195 deals in Q2’16 –, year 2016 is on pace to surpass 2015 investment levels, the report says.

Banks, financial institutions and insurance companies are finally starting to shift their view of fintech companies as disruptors and competitors to one where they are viewed as partners and enablers.

According to Arik Speier, co-leader of KPMG Enterprise Innovation Startups Networks and head of technology at KPMG Israel:

“Collaboration is happening differently in fintech globally. We’re seeing a new mechanism — a mix between incubation of new startups and in-house R&D (from the banking or insurance company perspective).”

“Instead of looking for a direct return, companies want to collaborate on products and be able to pilot technologies within their organization.”

Avalanche v Solana – Which one is a better buy?

Shiba Inu v Dogecoin – Which one is a better buy?