Financial institutions have a vested interest in adopting bitcoin, which has a number of attractive characteristics when compared with other currencies such a fixed money supply, being not government mandated, fast, digital, cheap and decentralized, according to Daniel Lipshitz, CEO and founder of GAP600.

“I do not subscribe that bitcoin will replace existing money systems, but it will become part of the financial landscape and add value,” Lipshitz told CoinJournal. “It will potentially change dramatically the financial and economic landscapes.”

“There is a massive opportunity for a financial institution to lead this process [of adopting bitcoin]. Currently, the players are trying to recreate bitcoin by controlling their own blockchain.  I think there is a massive gap for players to embrace bitcoin and have the advantage by being ahead of the pack.”

But for bitcoin to gain mainstream acceptance, there are a number of challenges to overcome, Lipshitz said. One of these challenges is the bitcoin confirmation time, which Lipshitz has set to solve in the beginning of 2015 when he started working on what would later become GAP600.

“When I came across bitcoin it was a major event in my career,” he said. “I have an economics, finance and Internet background and I soon came to agree with the viewpoint that bitcoin is money. I was completely fascinated by bitcoin and began researching where I could add value.”

“It seemed to me that the issue of zero confirmed transactions was a disclarity and a risk issue which could be cleared out via the development of a real time algorithm based on the necessary bitcoin infrastructure.”

His outlook is that bitcoin will eventually become part of the financial landscape. “Bitcoin has an intrinsic value proposition when compared to other currencies, and as the ecosystem develops to solve a range of bitcoin issues, it seems reasonable that financial institutions will embrace bitcoin alongside other currencies and financial instruments,” Lipshitz said.

His company, GAP600, which is based in Raanana, Israel, has developed a technology called G6 which analyzes and performs risk scoring for each transaction in real-time based on highly connected nodes within the bitcoin network.

Once the G6 system confirms a transaction, GAP600 then guarantees that transaction, for all cases. Even if double-spend, expiration, or other fraud prevents the transaction from reaching the blockchain, GAP600 will reimburse the resultant bitcoin loss.

The algorithm is based on real-time data science models and is constantly being monitored to provide the fastest and the most accurate response to ensure the instant acceptance of bitcoin transactions.

“The use case for instant transaction confirmation is an added value in many industries,” Lipshitz said. 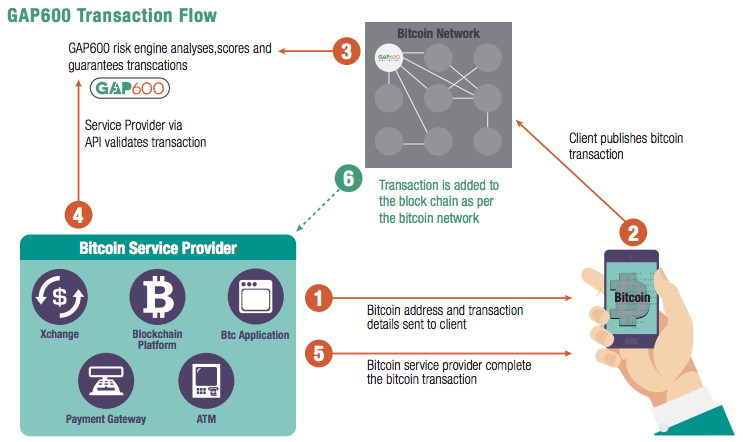 GAP600’s most recent milestone was to process more than US$20 million worth of transactions in a single month.

“We expect to grow and add further clients to our database, as well as partnering with further bitcoin and blockchain API service providers who can benefit from instant bitcoin transactions,” Lipshitz said. “We also believe that as the global financial landscape looks to embrace bitcoin, GAP600 will be able to add value to this truly great social project.”