Mintshop Makes ERC-1155 Tokens Simple, But is it Simple Enough?

Personally, I am not a huge fan of the blockchain-game craze. I am simply too familiar with both industries to believe they will meld together effectively in their current iterations. But Enjin’s ERC1155 Token Mintshop is bringing that reality one step closer to fruition.

First, a quick primer: The ERC1155 Token protocol was announced in September. It has a few claimed advantages over both the standard ERC20 and the popular ERC721 standards. For starters, ERC1155 tokens can be both fungible or nonfungible. Fungible means each token has the same value, like a gram of gold. A gram of gold is worth the same amount regardless of what shape it holds or where it came from. If it is gold and it weighs a gram then it is worth the current exchange rate for gold. The same applies to ERC20 tokens. There are no identifying features of individual ERC20 tokens. If I give you ten ERC20 tokens and Elon Musk gives you ten of the same token, there isn’t anyway to determine their uniqueness. You won’t be able to sell the certain tokens as “previously owned by Elon Musk”.

ERC721 tokens are non-fungible, meaning they each have their own unique history and properties. The popular CryptoKitties game uses the ERC721 standard, as does our upcoming range of physical collectibles.

ERC1155, however, can support both fungible and non-fungible assets. Within a game, this means certain items, like Ammo or health packs, could be represented with a fungible token while a unique piece of armor could be non-fungible, with its unique properties and history accessible and verifiable on the blockchain. You could in theory, trade some fungible ammo, healthpacks and a non-fungible “uncommon” weapon for a non-fungible “rare” item.

The ERC1155 token also limits blockchain bloat, because all of the tokens and items are traded using the same smart contract. That is opposed to other ERC tokens, that require their own smart contract for every transaction. CryptoKitties was a major contributor to overfilling the Ethereum blockchain when its popularity hit its peak in late 2017.

The Mintshop that was released today makes creating these ERC1155 tokens as easy as filling out a form. While ERC20 and ERC721 tokens can be created easily enough, they lack the functionality and scalability of the ERC1155 tokens. Now that it is easier to create those tokens, game developers have a more powerful option for shoehorning blockchain technology into their game. 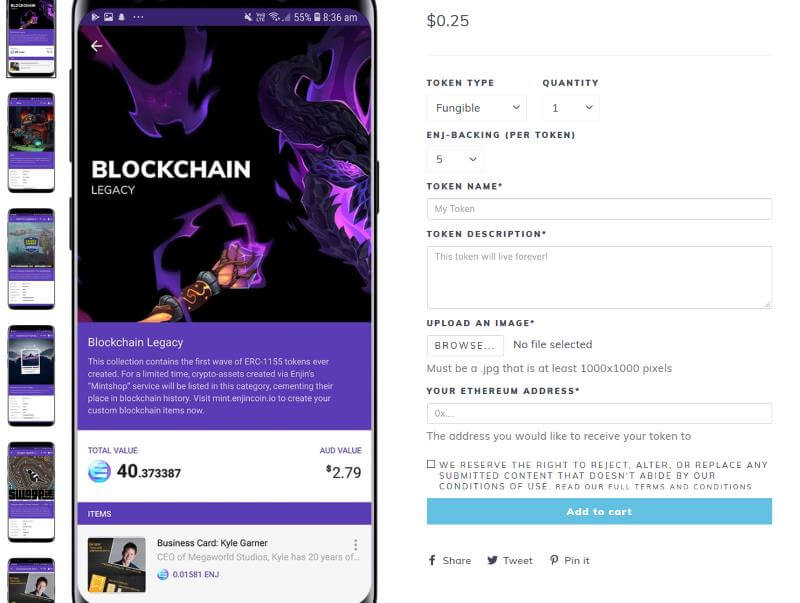 This, combined with their mobile wallet that recently added support for ERC1155 (along with ERC20 and ERC721) brings more accessibility to the new standard.

Hyperbolic press releases aside, this isn’t going to revolutionize the gaming world, at least not yet. Gaming has to be simple. People game to escape from responsibilities, not to add more. People aren’t going to be interested in downloading wallets, storing private keys and dealing with transactions outside of the game. Especially since trading of in-game items, along with most other functions of blockchain tokens in games, can already be accomplished using centralized databases.

There are some advantages of using a decentralized token within gaming. It is just that I don’t think those advantages outweigh the difficulty of using them. For an example, every ERC1155 asset is backed by Enjin’s own ERC20 token. Any in-game item can be “melted” back into the Enjin Coin that backed it, giving a base value to every item. It also opens up the possibility of trading items between games, or even bringing items from one game to another. Have two super rare items on a game you have been playing for months but want to play something new? Trade away one of those items to give you a head start on the new game.

But until someone makes it as seamless as trading CS:GO skins on Steam, we are unlikely to reap those benefits. That will require multiple talented and popular gaming developers to get on board with and help build the system. If a company of Valve’s reach and reputation got on board, that would instantly make it viable. Unfortunately, there hasn’t been any indication of something like that happening.

The ERC1155 protocol does have one standard bearer that gives it a chance to showcase the protocol in a true gaming environment. While most blockchain games boil down to simple collectible card games, Cats in Mechs is a project with actual gameplay, actual PvP and PvE modes and most importantly, looks fun to play. It also plans to have countless customization options, giving the blockchain connection something tangible to do.

While the developer has been active on social media, we haven’t seen any new gameplay videos in over seven months. Cats in Mechs could be the best blockchain game yet, or just another piece of Crypto-vaporware that a lot of people spend actual money on. Only time will tell.

And only time will tell if blockchain gaming is viable or an over-hyped fad. Despite being a lifelong gamer and having years of experience covering video games, I never thought live streaming would take off. Amazon’s 970 million 2014 purchase of Twitch.tv showed how wrong I was in that case. Will gamers really care that much about “owning” a virtual item rather than leaving that up to Valve to take care of? I have my doubts but I was wrong in the past. The only chance it has of taking off is if it is simple, and the Mintshop just made it a lot more simple, even if not simple enough.

We will have to wait and see if developers and gamers get on board.

What is next for crypto? Proof of reserves is not helping this mess