China wants to be a frontrunner in blockchain technology with local governments ramping up blockchain projects, and yet, the government still maintains a strict stance on cryptocurrencies, highlights a new report by Abacus, 500 Startups, and the South China Morning Post.

Local governments of Shanghai, Shanxi, Henan, Guangzhou, Guiyang and Hangzhou have all issued policies to encourage blockchain development, but Shenzhen and Hangzhou taking a step further by launching dedicated funds, the former pledging as much as 500 million yuan (US$79 million), the latter planning to invest some 10 billion yuan (US$1.6 billion) in a blockchain fund. Government officials of Hangzhou have claimed that it is the world’s biggest fund investing in blockchain projects.

Nationwide, the master plan for the Xiong’an New Area economic zone, created under a direct order from President Xi Jinping, has set out to use several advanced technologies including blockchain and cognitive computing to transform the area into a smart city.

In Hong Kong, the Global Trade Connectivity Network (GTCN), a cross-border infrastructure based on blockchain technology, entered its tendering phase in February 2018. The initiative, jointly developed by the Hong Kong Monetary Authority (HKMA) and the Monetary Authority of Singapore (MAS), aims to digitalize trade and trade finance between the two cities with plans to expand the network in the region and globally.

In the private sector, China’s Internet giants Alibaba and Tencent, among others, have been developing and ramping up blockchain development. Alibaba partnered with the city of Changzhou in August 2017 to launch China’s first application of blockchain technology in the medical sector. Tencent signed a strategic partnership with China Federation of Logistics and Purchasing in March 2018 to develop an industry application based on Tencent blockchain-TrustSQL, including platforms for e-waybill service, transportation management system and warehouse management system.

According to the 2018 China Internet Report, Bitmain is currently the most well-funded blockchain startup in China, raising US$450 million in funding as of June 2018. Bitmain is followed by Hyperchain, which raised US$230 million, and Canaan, at US$47 million.

Despite the blockchain craze, China is continuing its clampdown on cryptocurrency. In September 2017, China ordered the closure of all cryptocurrency exchanges and pronounced all initial coin offerings (ICOs) illegal, marking the start of the official crackdown on cryptocurrencies that saw a number of bitcoin traders relocate to other countries.

The crackdown paid off as trading of bitcoin against the Chinese yuan dropped substantially since. The Chinese yuan accounted to more than 90% of all bitcoin trading before the clampdown and now represents less than 1% of the world’s trading activity, according to data from the PBC. 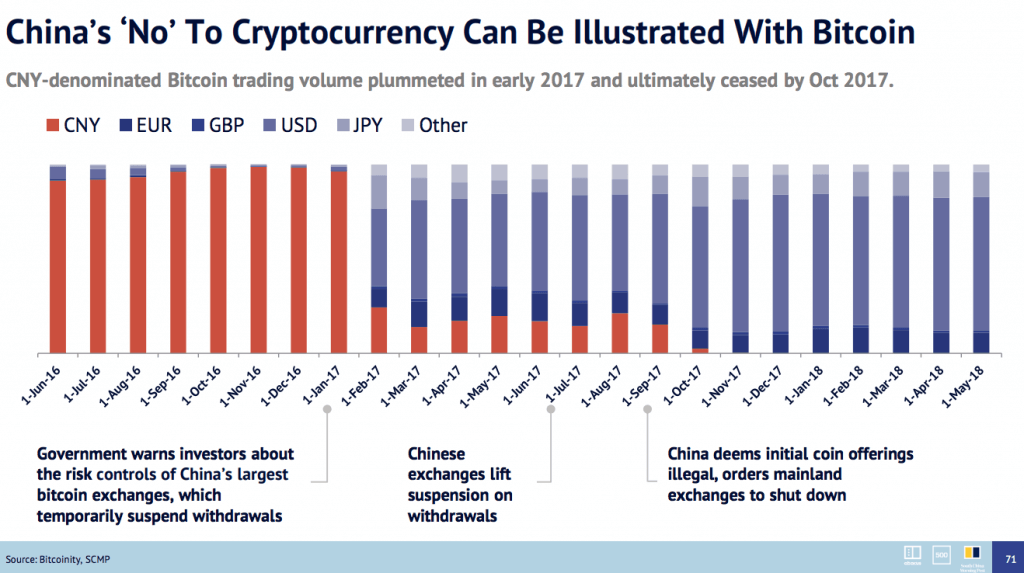 88 cryptocurrency exchanges and 85 ICOs have been shut down since September last year, according to the Xinhua News Agency.

“This indicates that the policy has been very successful,” Guo Dazhi, research director with the Zhongguancun Internet Finance Institute, told the Global Times on Sunday. “It is within expectations that the yuan’s share in global Bitcoin transactions would drop after China announced the ban.”

Among the key takeaways, the report highlights the role of government policies in shaping China’s tech industry, the country’s massive Internet economy, and the presence of China’s “Big Three” Internet giants – Baidu, Alibaba and Tencent – in nearly all key tech sectors, either by investing in startups or by building them themselves.

China has 772 million Internet users, or nearly three times the number of Internet users in the US, and there’s still plenty of room to grow as Internet penetration only stand at a mere 55% compared to 89% in the US.