Note: A Redditor pointed out two clarifications for this article. First, the Blockstream Store is still selling stickers. Secondly, the Eclair wallet does display the USD-denominated capacity amount when opening a new Lightning channel. I think I missed the stickers on the Blockstream Store due to the layout of the site. I’m not sure how I missed the USD-denominated balance displayed under the BTC amount when opening a new channel. I may have missed it because it is only displayed in a lighter font once you start typing in an amount of BTC, but now I see it clear as day. We’re leaving the article as-is and not correcting these errors since this is a description of an experience as it happened, but it made sense to add this clarification at the beginning.

On Thursday, I decided to try the recently released Eclair Bitcoin wallet for Android, which has support for the highly-anticipated Lightning Network. What follows is a thorough description of the entire experience.

The first thing I noticed when downloading the Eclair Wallet from AQINC was the relatively low number of downloads. Between one and ten thousand people have downloaded the Lightning-enabled wallet, as compared to the millions of individuals that have downloaded traditional mobile bitcoin wallets over the years. Of course, this is a new release with unpolished software, so the relatively low number of downloads makes sense. It brought me back to the earlier days of trying out the Blockchain.info wallet shortly after it was first released.

Once the app was downloaded and launched, the first thing that popped up was a full-screen warning message. 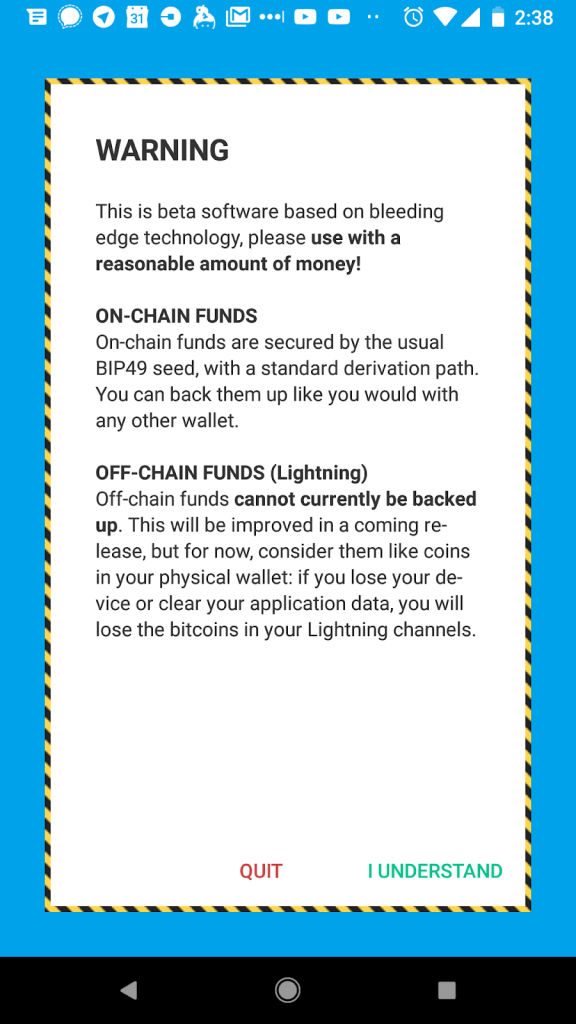 In addition to offering a reminder that this is still beta software and only small amounts of money should be used in the wallet for now, the warning message also indicated that no mechanism for backups is available for bitcoin held in Lightning channels. Oh well. This is the price paid for being a pioneer on the new frontier of the Lightning Network.

After signalling that I understood the risks involved with operating a beta-stage bitcoin wallet, I headed over to the Blockstream Store to see if there were any stickers for sale. There were only hoodies and t-shirts (and not much variety), so I decided to see what other Lightning-enabled sites were out there. I could always come back to the Blockstream Store later.

I know Bitrefill has been quite public with their support for Lightning payments over the past few months, so I headed over to their site to check it out. I wasn’t interested in buying any prepaid minutes for a mobile phone, but I still wanted to give it a try. They also sell Steam vouchers, so I figured I could buy one of those and send it to a friend to redeem (My days of binging Civ V are behind me, I think).

I chose the five euro Steam voucher before looking at the checkout options. 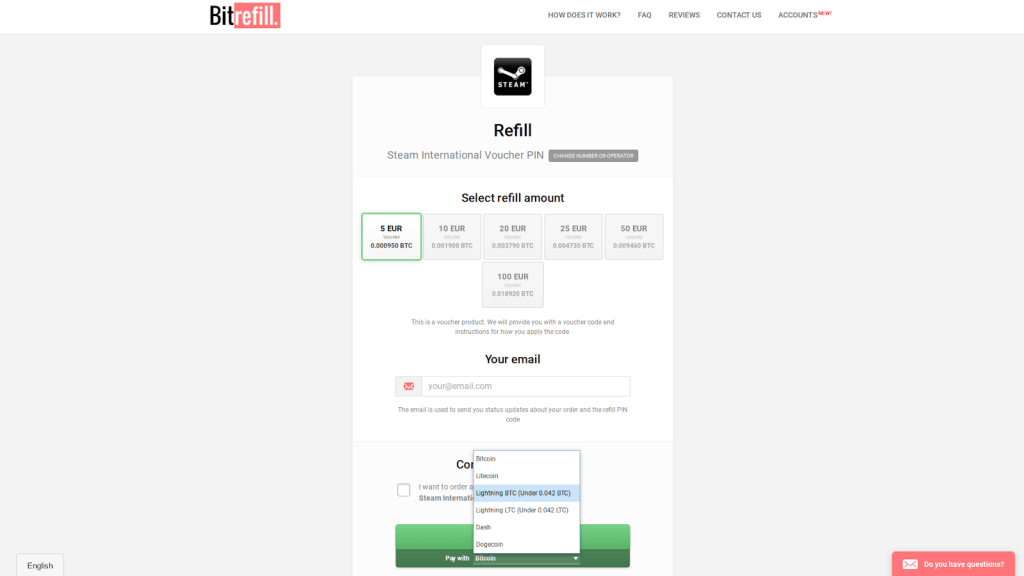 Interestingly, they accept both bitcoin and litecoin-denominated Lightning payments. I don’t have any litecoin, so it’s bitcoin for now. Hitting the “Pay Now” button brought up a screen that should look familiar to anyone who has made a payment via a bitcoin payment processor, such as BitPay, over the years.

At this point, I noticed the Eclair wallet was displaying a message that said sending funds is disabled because Electrum (the popular Bitcoin light client?) is disconnected. This message would pop up every now and then throughout my entire adventure. Having said that, it only happened when waking up the phone from sleep, so I imagine it had to do with turning off some activity while the wallet was not in use.

Clicking a help button on the payment page eventually led me to a screen with a QR code that could be used to open a channel with Bitrefill.

This is a symptom of the early days of the development of the Lightning Network. Generally speaking, less on-chain transactions will be needed once more people are making Lightning payments on a regular basis. In the future, perhaps I’d get paid for an article via the Lightning Network and then use some of that to purchase the Steam voucher without touching the blockchain at all. As of now, receiving Lightning payments via the Eclair wallet is not enabled due to security reasons detailed in an FAQ page.

To get some bitcoin into my Eclair wallet, I had to send the receiving address to myself over a messaging app. Not exactly the most user-friendly experience, but this is more of a general cryptocurrency issue rather than something specific to Bitcoin or the Lightning Network. Who would have thought that we’d still not be using human-readable names (similar to email addresses) to send bitcoin payments in 2018. Some wallets have moved in the right direction (think Samourai Wallet’s use of reusable payment codes), but the vast majority of Bitcoin software doesn’t handle this well at all.

I got distracted before copying and pasting the receiving bitcoin address into my messenger app of choice because it was time to play HQ Trivia. Once that was over, I decided to send a balance that had been sitting on an exchange (or at least part of it) over to my Eclair wallet. I knew it would take some time for the exchange to broadcast the transaction and for at least one new block to be found, so I took this time to cook a steak. 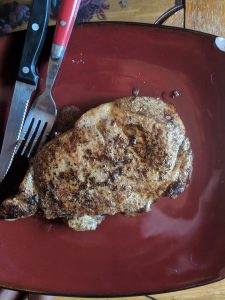