Previous article Will Dogecoin go parabolic? Here is a technical outlook and what a top analyst thinks Next article

Start
Home Latest Cryptocurrency News Will Dogecoin go parabolic? Here is a technical outlook and what a top analyst thinks

Will Dogecoin go parabolic? Here is a technical outlook and what a top analyst thinks

Dogecoin (DOGE) and its sister meme coin Shiba Inu (SHIB) will go parabolic once a bull market returns. Those are the words of Gokhshtein Media founder David Gokhshtein. The former US congressional candidate has been bullish on Dogecoin since 2021. Gokhshtein expects meme tokens to be the focal point of retail investors’ during the bull market.

Will DOGE go parabolic? It doesn’t take a lot of thinking to recognise that Dogecoin always makes momentous moves whenever good fundamentals are around it. Much as fundamentals drive DOGE, retail interest is too. That’s part of the reason Dogecoin has been called a meme cryptocurrency. Elon Musk, one of the key supporters of the meme coin, has been known to cause a retail frenzy.

If history is to repeat itself, then it is true that Dogecoin may experience a parabolic movement. In April 2021, at the height of the crypto boom, DOGE made parabolic moves, jumping from $0.05 to $0.75 in 3 weeks. DOGE trades at nearly the same level before the strong move back in April 2021.

Nonetheless, historical patterns show that DOGE makes late moves following major cryptocurrencies. That potentially explains why it becomes parabolic since traders flock to the meme token once bull markets are confirmed. To DOGE enthusiasts, such pointers are crucial in detecting when the cryptocurrency is about to go parabolic. 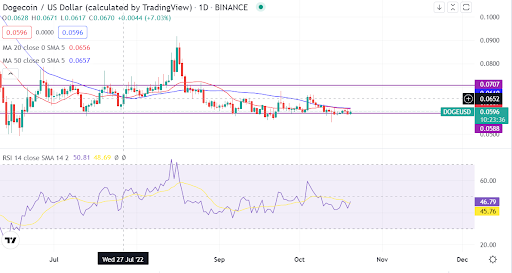 Technically, DOGE’s bearish momentum is showing signs of abating. However, we remain in a bear market, with the token below the moving averages. The RSI is slightly below the midpoint, indicating that the selling pressure is still on.

Should you buy Dogecoin?

The $0.059 zone is critical for DOGE. The cryptocurrency price has shown a lot of stability at the level lately. However, a weak sentiment remains in the market. If bears persist, DOGE could slide back to $0.05.

It may not be the right time to buy DOGE. Buyers have, however, a conviction that the zone between $0.05 to $0.059 could spark a bullish move. Potentially, this is the zone DOGE could initiate a parabolic move. Keep following.

Where to buy DOGE

Synthetix token soars 6%, but watch for bear repulse at the descending trendline

Is there hope for Theta token as the year comes to an end?

Algorand price fails to take off amid World Cup exploits. What next?