XRP surged to highs of $0.79 amid a parabolic rally that could see bulls target $1.00 short term

With Bitcoin stabilising at around $18,400, altcoins like Ripple (XRP), Cardano (ADA) and Stellar (XLM) took the cue to rally higher.

XRP rallied more than 60% in 24 hours to see it trade as high as $0.79 against the US dollar. The mammoth upside took the cumulative weekly rally for the digital asset to over 150%, making XRP the best performer among top altcoins by a mile.

At the time of writing, bears are battling to claw back the gains, with XRP/USD now trading around $0.71.

While a rally to $0.79 level remains the short term target, bulls will likely have to defend gains above $0.65 to remain on top. Otherwise, selling pressure may mean a retreat to $0.50 and possibly the long term $0.27 marked by the 100-SMA (weekly chart).

Looking ahead, the daily chart suggests the immediate resistance area is around $0.73. Above this, bulls will need to break to $0.75 and $0.79 (intraday high).

But with the RSI extended into overbought territory, a downside might be the path of least resistance. As such, the price might drop to the 78.6% Fib retracement level ($0.675) and then support at the 61.8% Fib level ($0.58). 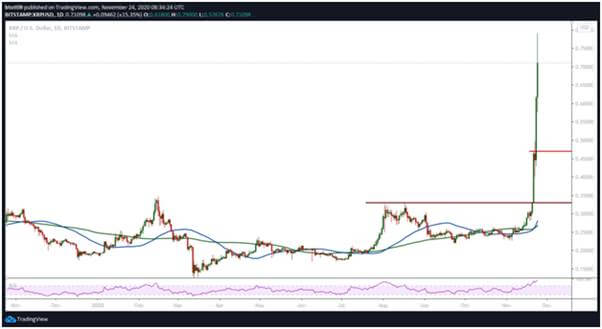 On the weekly chart, XRP/USD has continued higher after breaking above a descending trendline and the 100-day simple moving average. If the price settles above the 78.6% Fibonacci retracement level ($0.65), a retest of the $0.79 resistance area is likely, with further gains taking prices to highs of $0.83 and then $0.95. 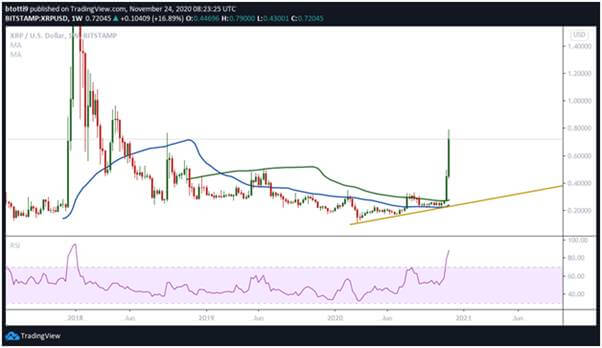 However, the weekly RSI is overextended and increased panic buying could be followed by significant selling pressure.

If XRP fails to clear resistance at $0.73 and drops to $0.65, the likelihood of an extended downside correction could see XRP price settle around $0.52. From here, the next support is at $0.46, with the $0.33 level that had capped 2020 gains before the recent breakout providing another safer landing base for bulls.