BitMEX is a cryptocurrency exchange and derivatives trading platform that has become hugely popular with those interested in the market. It is owned by HDR Global Trading Limited, registered in Seychelles, although its offices are located worldwide.

The founding team continues to work towards its "broader vision to reshape the modern digital financial system into one which is inclusive and empowering." Those involved with the launch of the system had become some of the most successful people involved in cryptocurrency and can be considered some of the leading experts.

BitMEX offers users the ability to trade with leverage using BTC, and its success is evident for everyone to see.

1
How to Set Up Your BitMEX Wallet
2
Pros & Cons
3
BitMEX Supported Crypto Coins
4
BitMEX Compared
5
History of BitMEX
6
Performance, Features, and Functionality
7
Is BitMEX for Me?
8
Fees and Costs
9
Final Thoughts

How to Set Up Your BitMEX Wallet

1. Create your Account/Download: There is no download required, as its wallet functionality is contained within its web client. It is designed to facilitate a seamless service of buying and selling your cryptocurrency without any confusion or unnecessary procedures.

2. Initial Set-Up: To begin depositing, access the left-hand navigation bar, click on ‘Account / Wallet’, and then ‘Deposit’. You will then be asked to verify your location. Select your country of residence and click ‘Submit’.

3. Receive and Send Cryptocurrency: Once you have verified your location, you will receive your personal deposit address. Using your Bitcoin wallet software, copy and paste the address before sending BTC. You will receive confirmation, and the deposit will be credited to your account.

Unique multi-signature deposit and withdrawal scheme
System is audited regularly with extreme scrutiny
Verified by an external service, providing an extra layer of security
Features the highest liquidity on the market, alongside highly competitive leverage
Customer support is excellent, with agents both readily available and knowledgeable
Most of the major cryptocurrencies are tradeable via the platform

BitMEX only supports Bitcoin, which is a natural decision considering that this is the most valuable and commonly used cryptocurrency available. Bitcoin was, of course, the pioneer in the cryptocurrency market, and is now widely used both as a trading mechanism and an everyday currency.

While it is limited to Bitcoin support, it does also offer trading options with several other cryptocurrencies. The first of these is Cardano - a decentralized public blockchain and cryptocurrency project currently fully open source. Cardano is the eighth largest cryptocurrency by market cap.

Bitcoin Cash is the next altcoin supported for trading purposes. Bitcoin Cash is an offspring of the original Bitcoin project and has carved out a strong reputation in its own right.

It also supports Ethereum, which is expected, considering that this is the second most valuable cryptocurrency. The market cap of Ethereum is more than 3x higher than any other crypto other than BTC.

BitMEX also supports Litecoin. This crypto coin was one of the big names in the field in its early days but has slipped behind some of the newer coins in recent years. Nonetheless, Litecoin remains the seventh-largest cryptocurrency by market capitalization.

Ripple is also supported for futures trading, and this is another cryptocurrency with a particularly bright future. Aside from its third-place ranking by market cap, Ripple has also forged numerous partnerships with mainstream financial services companies.

Finally, EOS Token is perhaps less well-known than some of the other coins supported. EOS is the native cryptocurrency for the EOS.IO blockchain platform and features smart contract capabilities.

There are several other alternatives on the market, and BitMEX offers some advantages and disadvantages over these sites. It enables higher leverage with a lower margin and a smaller minimum contract amount than its competitors, which is an attractive proposition.

It also uses the underlying index price for margin calculations instead of the most recently traded price. This helps ensure that the system is more secure, as it prevents malicious traders from manipulating the order book and causing erroneous liquidations.

However, one area in which it could improve is its provision of coins, with few supported compared to some of the other available solutions. Here are some alternatives that we also recommend.

For those who feel it isn't for them, there are plenty of other competing platforms that offer leveraged trading with their own wallets.

In 2014, BitMEX was founded by Arthur Hayes, Ben Delo, and Samuel Reed. The pioneers received funding from family and friends to build the platform. Its early years were focused on proving that it provided a viable platform for investment.

Within four years, BitMEX had grown considerably, establishing itself as a market leader, while Ben Delo was reported to be the United Kingdom's first billionaire and its youngest self-made billionaire. BitMEX had taken off and attracted many users, while Delo's investment proved to be hugely successful.

By August 2018, it was profitable and successful enough to move into the 45th floor of the Cheung Kong Center in Hong Kong - one of the most expensive office buildings in the world.

In February 2019, a blog post posted by BitMEX reported that it had traded a $1 trillion notional worth of cryptocurrency contracts in 2018.

In March 2019, BitMEX outlined its insurance fund's functioning, which supports their leveraged contracts in another publicly available blog post.

In May 2019, it revealed in its blog that the majority of traders do not trade at maximum leverage. BitMEX CEO Arthur Hayes described this as "quite responsible" behaviour. According to the data collected, the average leverage used by BitMEX traders was 29x on long positions and 26x on short positions.

In July 2019, BitMEX attracted some unwanted publicity when the Commodity Futures Trading Commission investigated the company, over whether they had broken the rules by allowing Americans to trade on the platform.

In August 2019, The Block Crypto reported BitMEX insurance fund had increased by approximately 50% since the start of the year.

And in July 2020, CEO Arthur Hayes announced that the digital currency platform, along with its former holding company HDR Global Trading, will have a new holding company. This new entity, the 100x Group, would oversee each business and its assets.

The first thing to note is that it has established itself as the most prominent solution on the market, a huge plus point. When you deal with BitMEX, you're dealing with the most credible and liquid solution, which can only be reassuring for clients.

Support offered by BitMEX has also been widely praised, with the website also packed full of useful information and features. The founders update the site regularly, and users can even keep abreast of this in real-time, via an announcement box.

Security features are industry-leading, while there is a good deal of information also included within the website on this critical subject. BitMEX is very transparent, and it isn't challenging to find out where the platform is registered and who owns it.

Most people who have used the platform have found it user-friendly, while the speed with which transactions are completed is impressive. Overall, BitMEX offers an excellent package.

BitMEX is focused on being intuitive and easy to use for those unfamiliar with markets and trading. And this means that its user interface is pretty straightforward to navigate. However, it is not aesthetically pleasing compared to some newer exchanges available, such as Binance Futures.

The appearance is quite similar to a spreadsheet program. Information is laid out fairly logically, and it can be navigated reasonably enough. Menus are located on the left-hand side of the screen, with more detailed trading data contained within windows. Certainly, those experienced with stock trading will be instantly familiar with the layout of the site. 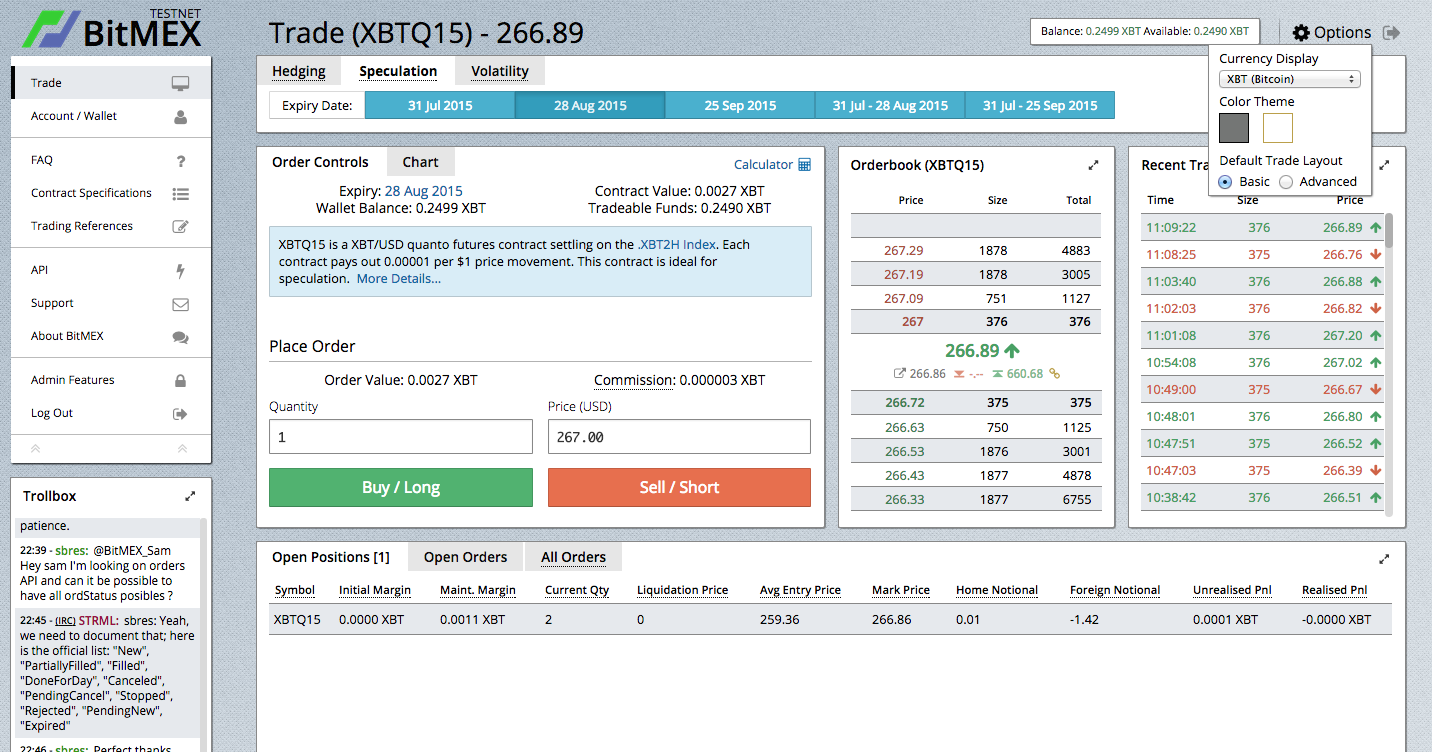 There is absolutely nothing wrong with the UI, but its presentation could be improved. Users do have the option to alter the colour scheme of the site, as shown in this image: 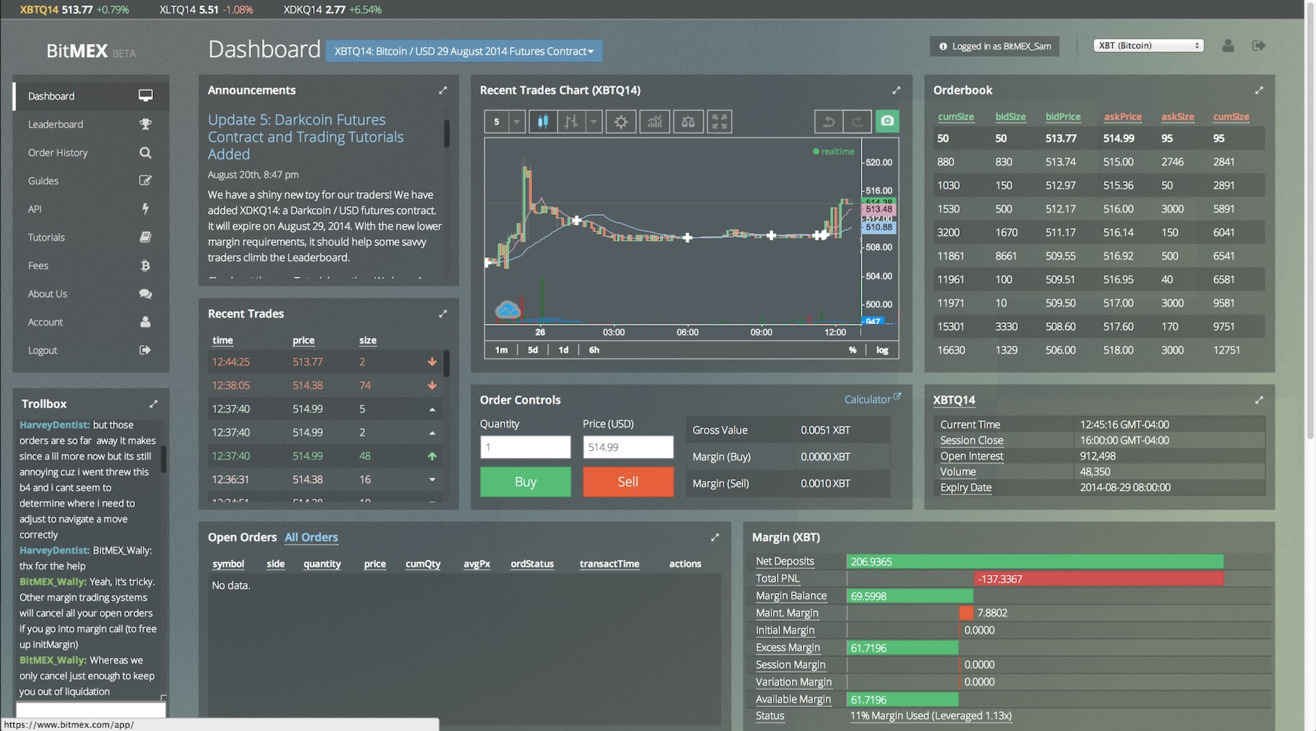 Perhaps a little more colour or a few more prompts would help the site's visual appearance. Nonetheless, the UI is more than adequate, it delivers what is required, but it could be improved significantly with just a little tweaking.

BitMEX is undoubtedly one of the safest solutions for its crypto storage and trading, particularly for those intending to margin trade. The security measures that it has in place are incredibly stringent and believed to be impossible to circumnavigate.

This is reflected in the fact that there has been no public discourse about tax or inconsistencies within BitMEX. And that's pretty impressive considering the massive daily volume that the site has racked up. There is no doubt that you can use with complete peace of mind.

How to Store Your Crypto Coins on BitMEX

Storing cryptocurrencies within BitMEX is relatively straightforward, particularly as its wallet functionality is so accessible. However, although it has an excellent reputation, it's always essential to take security seriously and ensure that it continues to deliver top provisions in this area.

Many investors choose to store cryptocurrency over a significant period hoping to profit from future price gains; therefore, a wallet is essential. Hence, many different solutions have emerged.

How to Transfer Your Crypto Funds From/To BitMEX

The process of transferring crypto funds from and to BitMEX is relatively simple, but there are a few steps involved.

Is BitMEX for Me?

It should be clear that BitMEX is an excellent option for cryptocurrency purchase, storage, and trading. But there are plenty of other options out there, and it certainly pays to shop around. Does BitMEX ultimately suit your personal circumstances?

If you're a beginner to cryptocurrency, you will find this platform quite complex, given that it deals with leverage trading. But, with a bit of research and education, you will be able to navigate the website quite easily. That said, BitMEX is definitely an ideal solution for what it offers. It is one of the biggest websites of its type on the Internet and has definitely established itself as the market-leader.

Those involved with the project are also passionate about cryptos, which has really helped enhance the credibility of the site.

Furthermore, BitMEX is user-friendly and features a large and helpful community of people ready to hold your hand through your early cryptocurrency trades.

The level of security that BitMEX delivers is also a massive advantage for beginners. And the fact that you can only store Bitcoin on the site shouldn't be a disadvantage of any particular significance for beginners.

This platform is perfect for advanced traders. But, those looking for more currency options may choose to trade elsewhere instead.

Some of the front-end options and features associated with BitMEX have also been criticized as being somewhat rudimentary compared to some of the competition. This could be an issue for advanced crypto traders.

However, the outstanding level of security that has been built into BitMEX will undoubtedly find favour with more advanced users.

The fact that BitMEX offers a multi-signature wallet will also appeal to many experienced cryptocurrency traders.

Fees are definitely competitive on BitMEX and are, in fact, virtually non-existent. The taker fee is set at 0.0750%, and the maker fee can be as low as even -0.0250%, meaning that the maker actually grabs a little rebate on trades.

It should also be praised for its transparency, as its fee structure is openly available via its website.

There are always some risks associated with any form of trading, and this definitely applies to cryptocurrencies as well. But BitMEX attempts to make the process of owning, storing, and trading cryptocurrencies as painless as possible, and is largely successful in this goal.

It's not surprising that the founders of BitMEX have gone on to huge success, as this is a highly slick and secure platform, which will appeal to cryptocurrency users of all levels of proficiency. The position of BitMEX as an industry leader is fully deserved.

See all pages ›
We use cookies to personalise content & ads, provide social media features and offer you a better experience. By continuing to browse the site or clicking "OK, Thanks" you are consenting to the use of cookies on this website.